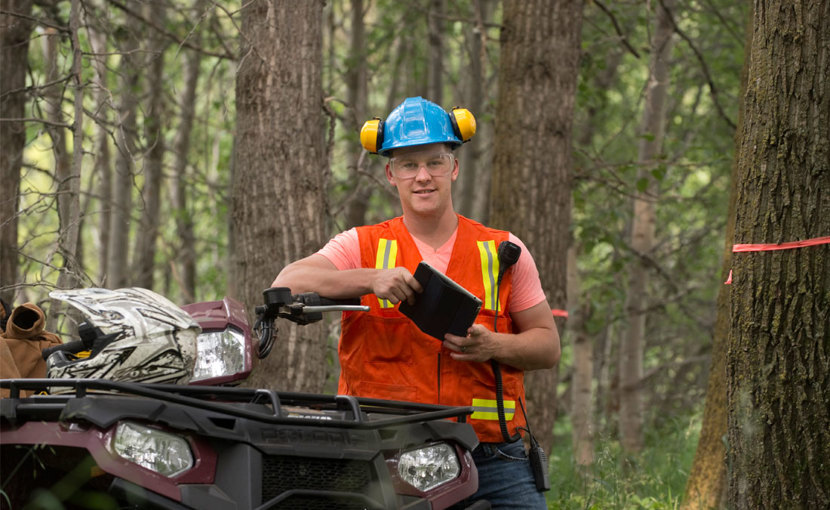 Forestry and Logging With Support Activities

At 38 million hectares, Alberta's forests cover a land mass equal to the size of Japan. The provincial government allows an annual harvest of more than 31 million cubic metres of timber. Because harvesting is balanced with reforestation, forestry industry workers planted 74 million seedlings in 2016. Forestry and logging industry products include building supplies, pulp and paper, animal bedding material and a variety of engineered wood products.

Gross domestic product (GDP) measures the overall size of an economy. In 2015, the forestry and logging industry made up 0.1% of Alberta's GDP. This is a 0.2% decrease from 2013.

Data for women in the industry is not available.

Alberta shipped a record $5.6 billion in forest products in 2016. Of that amount, $2.9 billion went to exports. In March 2017, the benchmark price (which is based on the average of 15 key framing lumber prices) reached near record levels at $580 per thousand board feet. The one-year moratorium after the Canada-U.S. Softwood Lumber Agreement expired in October 2015 helped. It allowed Alberta lumber producers to have unrestricted access to U.S. markets. These gains occurred even though the Fort McMurray wildfires disrupted operations such as those at Northlands Forest Products for a month.

The digital world has lowered the demand for newsprint. However, a 40% increase in e-commerce sales in Canada in 2016 is increasing the demand for the paperboard that is used to deliver goods directly to consumers. An increasing demand for sanitary products from emerging markets has also helped the industry.

Closures and mergers in the industry have resulted in larger companies that can take advantage of greater economies of scale. When combined with the industry’s investment in machinery at the beginning of the decade, this has meant greater productivity with fewer employees.

Canada’s lower dollar has made lumber exports competitive. However, the two sets of U.S. softwood lumber duties in 2017 will cause the industry’s growth to slow down. Alberta may look beyond American markets, especially to the lumber-hungry markets of China.

Alberta’s major market is still south of the border. Given the recovery of the U.S. housing market, the demand for lumber will still be high. While the duties will hurt industry profits, it is expected that only half the cost of the duties will come out of producers’ pockets. The rest will be passed on to American consumers.