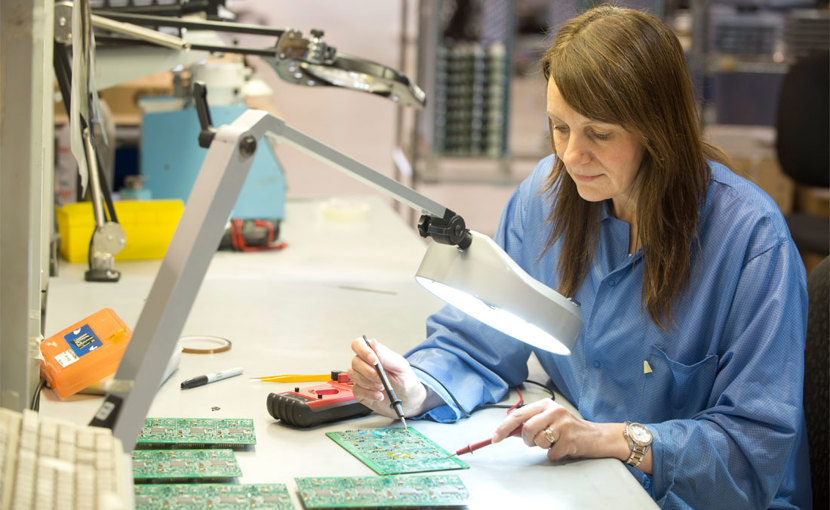 Companies that take one or more products and create new products from them are part of the manufacturing industry. These companies may smelt ore into iron or use that iron to make machinery. Manufacturers refine petroleum, process beets into sugar, or make dog food. Canadian Manufacturers & Exporters, a national trade and industry association, reported that in 2016, Alberta's major manufacturing sectors were food products (21.7%), chemical products (21.1%), and petroleum and coal products (20.3%).

Industries that process oil and gas normally buy about 40–50% of Alberta’s manufacturing sales. When the price of oil dropped in 2014, so did sales in the manufacturing industry. The recovery has been slow. In 2016, the industry had another 8.6% drop in sales, to $62.6 billion. Part of the decrease came from the shutdown in oil sands production after the Fort McMurray wildfires.

Still, sales of machinery for drilling started to climb in July 2016. By the first quarter of 2017, manufacturing regained almost 60% of its sales from 2014.

Chemical manufacturing benefited not only from higher prices, but from a 50% increase in capacity since late 2015. Some of this recovery came from the opening of an ethane production facility near Redwater in April 2016 and the expansion of a polyethylene plant near Joffre in December 2016.

Alberta’s economy is expected to outperform all other provinces by growing 3.3% in 2017, and another 2.4% in 2018. Manufacturing will play a large role in that recovery. Some of that recovery will be due to Suncor’s Fort Hills project, which will start operating in 2018. Food manufacturing will continue to play a large role in the industry, especially now that Country of Origin Labelling restrictions have been removed in the U.S. The Industry’s GDP is expected to rise from $16.8 billion in 2017 to $18.2 billion in 2021.