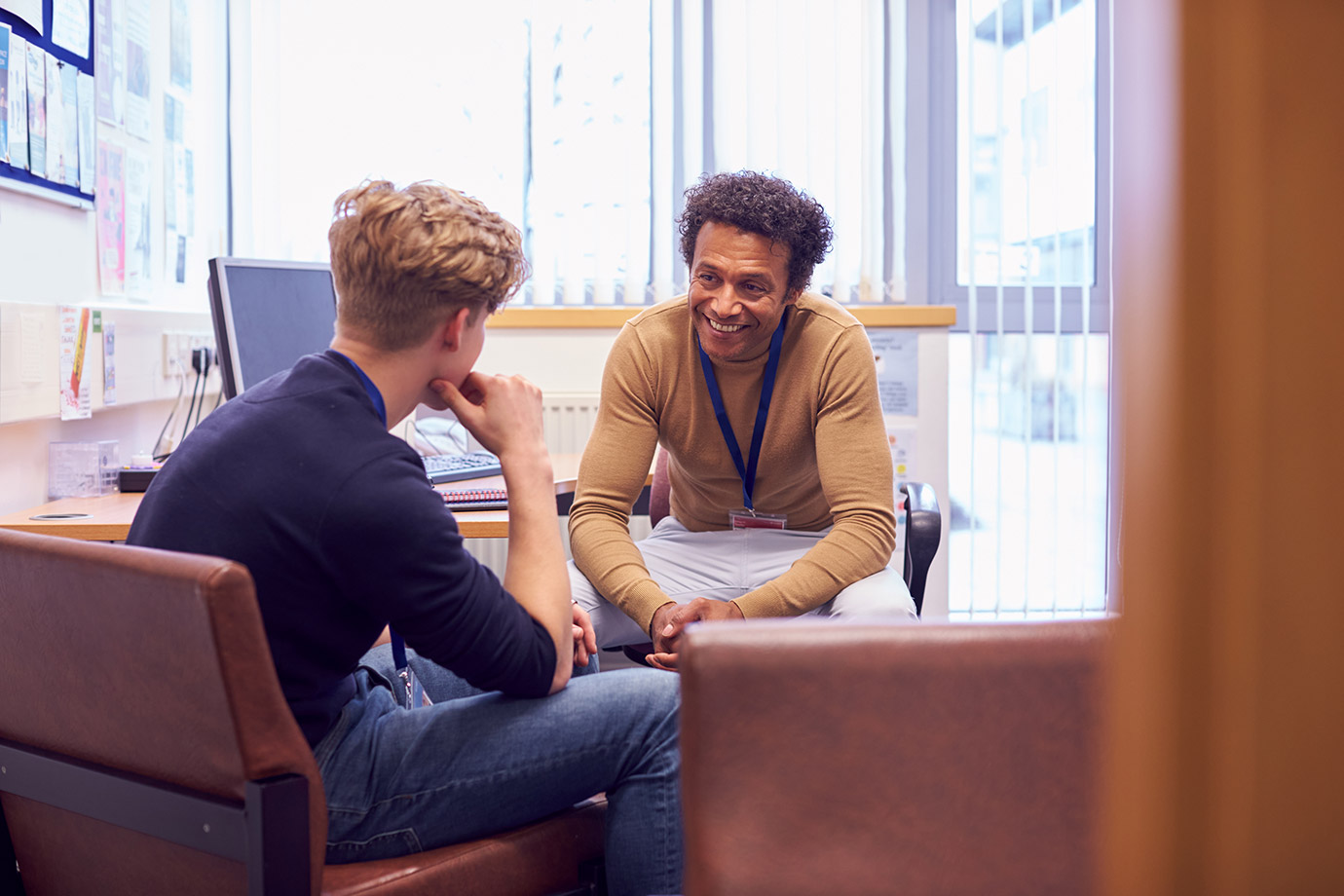 Important Context for Counselling People With Mental Health Disorders - alis
Learn about the wide range of mental health disorders and the barriers and challenges that clients with these disorders may face.
Choose a guide...

©
iStock.com/monkeybusinessimages
Inspire
and Motivate
What Works: Career-Counselling Strategies for Diverse Clients
A A

Important Context for Counselling People With Disabilities and Disorders

Review how models of disability and related legislation have evolved and consider the barriers and challenges that people with disabilities, disorders, and disabling diseases still face.
©
iStock.com/kali9
Inspire and Motivate

People with different types of disabilities have unique needs. Consider these specialized strategies when counselling clients with specific disabilities.
©
iStock.com/DOBphoto
Inspire and Motivate

Be aware of terms that demean people with mental health disorders. Words such as crazy, lunatic, psycho, mad, maniac, demented, mental, and loony are derogatory. Do not use them to describe a client—or any other person. Using terms like these in daily conversation perpetuates negative ideas about people with these disorders.

In general, avoid using a term that describes any disability or disorder as a way to describe the whole person. For example, in the case of mental health disorders, do not say, “She’s a schizophrenic” or “He’s a psychotic.”

If you use medical terms in conversation, be sure to use them correctly. Terms like psychotic, neurotic, manic, and OCD are inaccurately used in everyday language. This trivializes the people who live with these disorders. Avoid using medical terms outside the correct medical context.

Never use the terms insane and insanity outside a legal context.

Except in legal use, the terms insane and insanity are derogatory.

Clients with mental health disorders may have trouble with major life activities. These include working, going to school, and taking care of themselves. Mental health disorders often begin during adolescence or young adulthood but they can start at any age. The symptoms are often hidden except during acute phases.

The standard criteria for classifying mental disorders can be found in the Diagnostics and Statistical Manual of Mental Disorders (DSM-5). Published by the American Psychiatric Association, the DSM reviews and updates terminology, definitions, and diagnostic criteria every few years. In the DSM-5, published in 2016, some disorders were added and others removed. The criteria for some disorders were changed. The following sections share information on mental health disorders from the DSM-5.

Antidepressants or anti-anxiety drugs can help clients handle anxiety. Cognitive behaviour therapy can also help. Drowsiness is often a side effect of drug treatment. It may affect the counselling process.

This a new category in the DSM-5 grew out of increasing information about post-traumatic stress disorder (PTSD). It is now understood as a spectrum disorder. Treatments for mild and severe versions of the disorder vary widely. Some other disorders have been regrouped into this category:

In all these disorders, the urge to eat or not is too strong to resist. Periods of shame, guilt, and embarrassment follow every binge. All eating disorders can cause lifelong health issues, such as kidney or heart disease. In the worst cases, they can be fatal.

Eating disorders affect up to 5% of the population. People with these disorders may struggle with anxiety, depression, or substance abuse. Most people diagnosed with anorexia or bulimia are females between 12 and 35 years. However, eating disorders can affect people of any age or gender.

Counselling professionals should support clients to correct their behaviour first. Cognitive behavioural therapy (CBT) on an outpatient basis has proven effective, though advanced anorexia may call for hospitalization. Underlying psychological issues should only be addressed once the client is safe from physical harm.

Depression and bipolar disorder are the most common mood disorders. Also called affective disorders, they colour a person’s worldview and experience of life.

Depression, also called major depressive disorder, may cause feelings of sadness and tearfulness. But it is more than normal sadness or low energy. It can cause:

Bipolar disorder causes mood swings. The main types of this disorder are bipolar 1 and bipolar 2. Both involve cycling between depressive and manic phases, although the term manic depression is no longer used. In bipolar 2, the manic phase is called hypomania. It is less severe than the mania of bipolar 1, which may trigger psychotic or grandiose behaviours. In these phases, the patient can endanger themselves and others. They must stay in hospital until their mood stabilizes.

The manic or hypomanic episodes of bipolar 1 and 2 share similarities. The client may:

Bipolar disorder can be treated with medicines, education, and counselling. Medication can have adverse effects such as drowsiness and weight gain. Clients may stop taking the medication to avoid these effects, or it may need to be changed or adjusted.

It can take time for clients to stabilize. This can be discouraging. An important role for employment counsellors is to help clients stay focused on long-term goals.

Personality is made up of a set of enduring behavioural and mental traits that distinguish one person from another. Personality disorders are patterns of behaviour that deviate from social norms. They begin in childhood or adolescence and do not change over time or in different situations.

People with personality disorders tend to:

These issues can give rise to a pervasive negative view of life and maladaptive coping skills. This can lead to depression, anxiety, and other co-occurring mental health issues.

Up to 60% of psychiatric patients have personality disorders, making them the most common mental health issues. A person may have traits of 2 or more disorders.

People with personality disorders tend not to see problems in themselves. Some struggle in the workplace and turn to substance use to cope. They may be the most likely to be diagnosed and treated. Others use traits such as superficial charm, lack of empathy, manipulation, and perfectionism to achieve professional success, sometimes at the cost of relationships. They often go undiagnosed and untreated.

Treatments for personality disorders may include intensive personal counselling, group training in techniques such as dialectical behavioural therapy (DBT), and psychiatric drugs for depression and anxiety. Family and community support is important.

People with schizophrenia show disturbances in language, communication, thought, perception, and behaviour. These people may have:

Schizophrenia affects less than half a percent of people worldwide, but it can cause distress across every area of life. There is much stigma against people with schizophrenia, who often experience human rights violations. This stigma can limit their access to health care, education, housing, and work.

The most common form of treatment is therapy with antipsychotic drugs. These can have adverse effects including drowsiness, blurred vision, and weight gain. Patients may not be able to do certain activities, such as driving and using machinery. Despite adverse effects, can drugs help patients control symptoms and hold a place in society.

Substance abuse is the continued use of substances despite negative effects in major life areas. Progressive dependence on a substance may trigger other mental health disorders. If a person stops using the substance, it causes withdrawal.

Long-term heavy alcohol use can lead to stomach ulcers, sexual problems, liver disease, brain damage, and cancer. Inhalant abuse damages the central nervous system and can trigger behaviours much like those caused by psychotic disorders.

The first step in treatment is detoxification (quitting the substance). This may be followed by psychotherapy, counselling, continuing education, and 12-step recovery programs.

In both disorders, the person’s need for reward increases over time: they need more of the substance or to gamble with larger amounts, to achieve the same sense of euphoria. They take increasing risks in their pursuit of that euphoria.

To be diagnosed with gambling disorder, a person must show at least 4 of the following problems within a 12-month period:

Comorbid disorders raise questions such as:

“The level of people’s ability to cope always amazes me. No matter if a person has been diagnosed with depression, schizophrenia, or bipolar disorder, they continue to desire to function in a healthy manner. They want to be loved, be productive, get respect—no different than any other person.”

Complexity of treatment and recovery

Treatment for mental health disorders must reflect their complex origins. A variety of treatment strategies can improve a person’s functioning and quality of life. Examples include psychotherapy, CBT, medicine, and occupational therapy.

People with mental health disorders play an important part in their own recovery. However, they can’t simply “snap out of it” or “pull themselves together.” They may have cyclical periods of wellness and illness. Many develop successful strategies for their periods of illness. Supports such as workplace accommodations help them do so.

It is not always possible to tell if the traits exhibited by a person with a mental health disorder are caused by the disorder or its treatment. The adverse effects of psychiatric drugs are important in the counselling process. They often present major barriers to career and employment options. These include both overt and subtle adverse effects, such as mood swings, decreased psychomotor control, and trouble concentrating.

People with mental health disorders respond to stress in highly individual ways, just as people without them do. Stress can come from many sources: struggling with basic self-care, managing finances, or dealing with relationships. People do not always understand what triggers stress. You can help clients determine what causes stress for them and help them find practical coping strategies.

The following are categories of factors associated with suicidal behaviour:

Treatment seeks to address the factors that influence suicidal thoughts and behaviour. This can include psychotherapy to deal with family and personal history. It can include CBT, DBT, and other ways to provide people with tools to deal with difficult thoughts and habits. It can also include medication for depression, bipolar disorder, or other issues that respond to drug therapies.

“People thrive on unconditional positive regard. Approach an individual with a mental illness no differently than you would anyone else. Have the belief in people that they can accomplish what they need to accomplish.”

People with serious mental health disorders may face more stigma at work than people with other disorders and disabilities. Stigma may cause anger and avoidance behaviours, affecting employment options, career advancement, and quality of work life.

Another myth is that people with mental health issues cannot keep a job because they are less intelligent and have trouble learning. Some people also falsely believe that mental health disorders are caused by personal weakness.

Try to deal directly with the myths and stigma your clients encounter. For example: