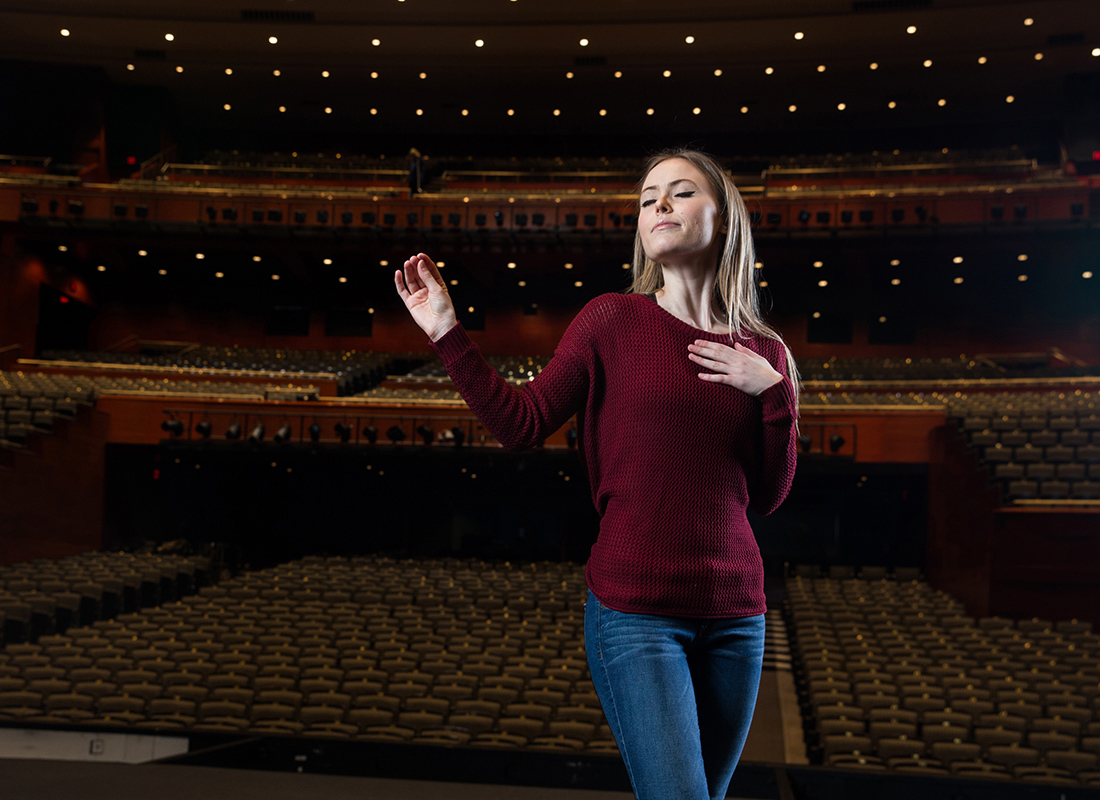 Actor: Occupations in Alberta - alis
Do you like performing? Do you have a passion for being centre stage? Then you may want to find out if a career as an actor is the role for you.
Choose a guide...

Actors perform roles in dramatic productions on stage, radio, television, in movies and in new media arts. They also perform in television and radio commercials, and work in media narration and voice-overs (for example, video games).

Interest in synthesizing information to develop character roles and memorize lines and cues; and in attending rehearsals, wardrobe fittings and make-up sessions

Interest in auditioning and rehearsing for roles

Actors' duties vary depending on the requirements of the roles they play but, in general, they:

Stage actors may be invited by directors or playwrights to workshop new plays. In workshopping - this script-development process - actors may be asked to read a character's lines or stage all or part of the play to help directors or playwrights see the characters brought to life. Performers also may be invited to become part of a collective. Collective creation is a collaborative method of play development in which the group as a whole devises a new play.

Voice actors lend their vocal performances to commercials, video game or film projects. Because there is no physical performance, vocal actors need to project a character solely through their voice.

Motion Capture (MoCap) actors lend their physical performances to computer gaming or animated characters. They project a character through their body movements. The same actor may also do the vocal performance, or another actor may do it.

Actors often work long, irregular hours and may work holidays and weekends. Rehearsals may vary in length depending on the medium in which the actor is working.

Weekly television shows and commercials usually are filmed in a short period of time, allowing actors less time to prepare and rehearse. Miniseries, specials and movies take much longer to film and involve more rehearsal time. 12-hour workdays are common in television and film. Actors may be required to shoot scenes that are dependant on time of day or weather.

Stage actors have longer rehearsal periods than performers on radio, television, or similar settings. They must be ready for opening night and be able to duplicate their performances consistently throughout the length of the play's run. Many plays can run up to 2 hours in length, so  actors must remember all their lines and perform them correctly every time.

Most actors in stage productions perform 6 evenings each week and 1 or 2 matinees on weekends. Their normal day off is Monday. Plays or musicals usually run for several weeks. Some productions run for months or even years, although the casts may change.

When performing in plays or working on films, it is common for actors to travel to other cities. They may be away from home for a few weeks or several months. Working on location may involve working in a wide variety of environments (for example, in noisy factories, underground or in severe storms).

Voice actors have less preparation time than stage or film actors do. These actors read their scripts in sound recording booths. Sometimes they need to match their performance to other audio tracks or video recordings.

Motion capture (MoCap) actors perform in an area enclosed by special walls or screens. Special sensors are placed on key objects and the body joints of the performer, who wears a special suit for this purpose. The sensors then feed data to computers, which transfer the actor’s motions into 3D models to achieve realistic performances by the game or animation characters. MoCap actors may be required to repeat the same actions many times until the performance data is acceptable, which can be physically demanding.

They should enjoy having variety and creativity in their work, as well as the recognition and freedom their work brings.

Actors must have performance experience. They often start their careers by appearing in amateur theatre and school productions or by working with community theatre groups.

In a talent-based occupation such as acting, related education does not guarantee success. However, versatility is a definite asset. Acting, singing, movement and dance skills increase an actor's potential for success in this highly competitive field.

Many actors also benefit from developing their skills in negotiation and business management. Since most actors are self-employed independent contractors, they operate as small businesses and often negotiate their own contracts.

Theatre Alberta holds an annual audition event in Edmonton and Calgary to bring together graduates of Alberta post-secondary acting programs with the province's artistic directors, freelance directors, casting directors and talent agents. Participation is by invitation only.

Throughout their careers, professional actors continue to take speech and voice training, movement, stage combat and other specialized courses or lessons to maintain and refine their skills.

Getting started as an actor requires spending time preparing monologues for general auditions, reading for parts and getting to know people (and thereby becoming known) in the industry. Established actors, especially in television and film, often have agents who represent them and arrange for auditions.

Stage actors look for work by auditioning for the artistic directors of professional theatre companies. Once a year companies hold open auditions to see as many new actors as possible. Larger theatres such as the Citadel Theatre in Edmonton and Theatre Calgary send directors across Canada to audition actors. Professional theatres in Canada are permitted to hire a certain percentage of non-professional actors. This is how many new performers are hired for their first part. Being in the right place at the right time and having the right look also play a role in getting a first part.

Auditioning for film and television usually involves meeting with producers or directors who may already have seen the actor's resume and photograph. Sometimes actors are called back 2 or 3 times to audition before a casting decision is made. Most film and television actors have agents to arrange auditions and negotiate contracts.

Game developers and computer animation developers look for motion capture actors based on their body proportions and movement abilities. Developers also look for facial features and expressiveness if facial performance capture is needed. A resume detailing body dimensions and any specialties in physical performance (such as dance, gymnastics, acrobatics, stunt or fight choreography) helps identify good matches to the character to be animated.

Many actors create their own work by developing (collectively or independently) theatre or film scripts which they then produce or direct themselves.

Professional actors usually belong to the Canadian Actors' Equity Association (for live performance) or the Alliance of Canadian Cinema, Television and Radio Artists (ACTRA). These unions set minimum fees and working standards. Actors must gain some experience performing in equity (union) productions before they are eligible to join. It is possible to work as a professional actor without joining either union; however, most actors belong to at least 1.

In Alberta, the 5135: Actors and comedians occupational group is expected to have an above-average annual growth of 2.6% from 2019 to 2023. In addition to job openings created by employment turnover, 39 new positions are forecasted to be created within this occupational group each year.

An actor's life is rarely financially rewarding. Minimum wages are set by unions and maximum wages are negotiated by actors or agents. However, many actors accept non-equity (non-union) work or work in co-operative productions. Some actors generate their own work by creating productions for fringe festivals or other events that are open to all submissions.

Many actors must supplement their income between performances by taking part-time jobs that may be unrelated to acting. Others may work as directors, acting or voice coaches, or post-secondary drama teachers.