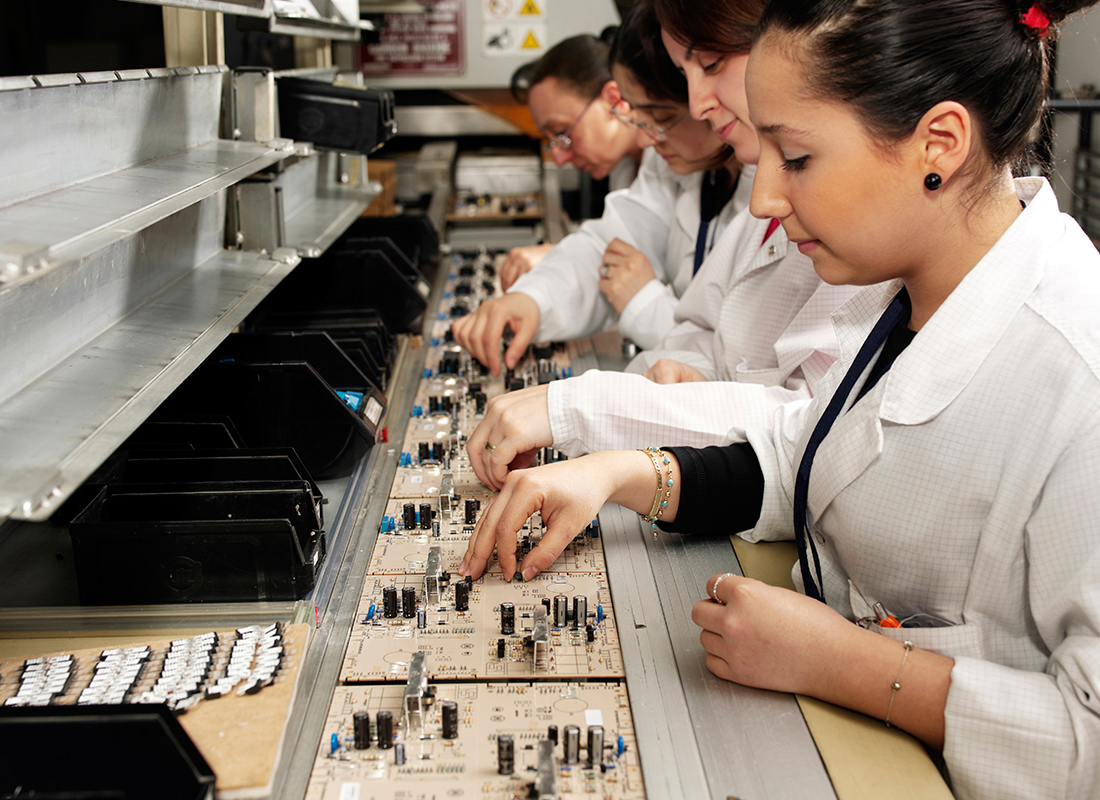 Electronics Assemblers and Fabricators: Occupations in Alberta - alis
Do you like routine and clear rules? Do you enjoy working at a steady, rapid pace? Do you like to assemble things? Then maybe you should put together a career as an electronic assembler and fabricator.
Choose a guide...

Create New Guide What is an alis guide?
Close
Occupations in Alberta
©
iStockphoto/gerenme

Electronics assemblers and fabricators assemble and fabricate electronic equipment. They mount, secure, connect, and adjust the parts and components.

Interest in precision working to assemble microcircuits requiring fine hand assembly, and to use microscopes and adhere to clean-room procedures; and to operate automatic and semi-automatic machines to position, solder and clean components on printed circuit boards

Interest in verifying dimensions and alignment of parts; may replace defective components

Electronics assemblers put together electronic components, sub-assemblies, products, or systems. They may:

Most electronics assemblers and fabricators work in assembly plants. They may need to do shift work.

Where electronics assemblers also do mechanical assembly, some heavy lifting is required.

Electronics assemblers and fabricators need to:

There are no standard education requirements in this field. However, employers may prefer high school graduates. A basic knowledge of electronics is an asset. So is experience with soldering and identifying components.

Courses in basic electronics are offered by:

Many courses take place on evenings and weekends.

Electronics assemblers and fabricators are trained on the job. Training periods range from 1 week to 6 months. The length depends on the complexity of the work and the worker’s interest in learning more complex tasks.

Electronics assemblers and fabricators work for companies that make electronic devices. Plants tend to be in or near cities. This is where they have access to parts, courier services, and customers. They hire many employees on a temporary basis for peak periods. Employees may be laid off when production slows down. Those who are self-employed do piece work.

Moving up to electronics tester roles may require post-secondary education in basic electronic theory, testing techniques, and testing equipment. Without further education, it is hard to advance beyond testing components or supervising assembly lines.

In the 9523: Electronics assemblers, fabricators, inspectors and testers occupational group, 79.5% of people work in:

In Alberta, the 9523: Electronics assemblers, fabricators, inspectors and testers occupational group is expected to have a below-average annual growth of 0% from 2019 to 2023. In addition to job openings created by employment turnover, 0 new positions are forecasted to be created within this occupational group each year.

Earnings depend on the level of skill needed and the terms of payment. Some assemblers are paid an hourly rate. Others are paid on a piece-work basis.