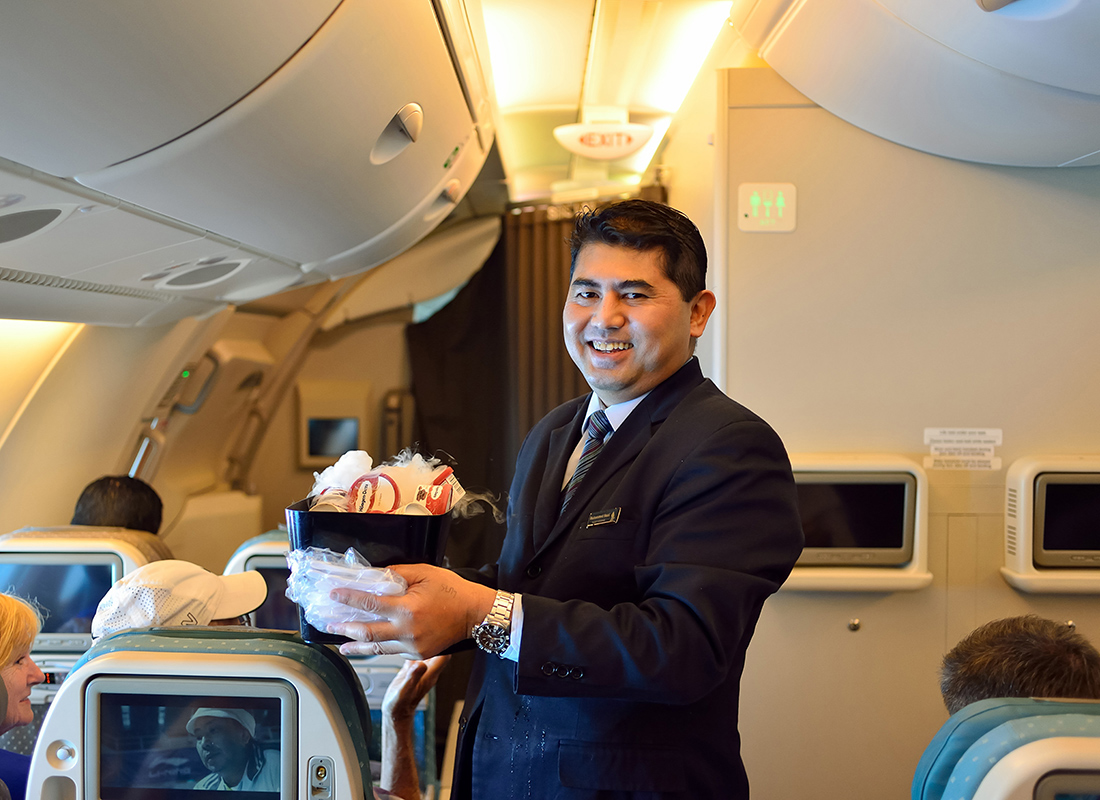 Flight Attendant: Occupations in Alberta - alis
Do you enjoy flying? Do you like attending to people’s needs? Are you safety conscious? Then you may want to buckle into a career as a flight attendant.
Choose a guide...

Flight attendants make sure passengers and crew are safe on flights. They offer a variety of services to make flights as pleasant as possible. In emergencies, they work with other crew members to help passengers.

Interest in assisting passengers and attending to their safety during take-offs, landings and emergencies

After takeoff, flight attendants help passengers enjoy the flight. What they do depends on factors like:

Based on these factors, flight attendants may:

After landing, flight attendants help passengers leave the plane safely. They tidy the cabin and check for things left behind.

The lead flight attendant is sometimes called the purser. The purser usually submits the flight paperwork.

Flight attendants may spend up to half of their working hours:

Flight attendants work in a confined space. It can be noisy and physically demanding. Flight attendants spend most of a flight on their feet. They move heavy galley equipment. They may encounter dangerous situations. Working with a cold may hurt their ears.

Work hours are irregular. Shifts can be long. Some workdays last up to 14 hours. Flight attendants may be away from home for several days. They may have short layover times at home and then go back to work. Recurrent jet lag (from going through many time zones repeatedly) can affect some workers’ health.

They should enjoy having clear guidelines for their work and handling equipment. They should like helping people.

Hiring requirements vary from one airline to another, but certain basics are common. In general, to work for an airline in Canada, flight attendants must:

Some airlines in Canada require bilingualism in English and French. Others might consider fluency in many other languages as well as English to be an asset. This depends on the route. If passengers on a route tend to speak a certain language, flight attendants should too.

Airlines provide 2 to 8 weeks of training. Training covers a wide range of subjects, including safety and emergency procedures. Flight attendants receive training to fight fires, apply first aid, and other skills, which they update every year. After training, the airline assigns those who have completed the training successfully to one of its bases.

Private vocational schools may offer pre-employment, in-flight training programs. Before enrolling, it is a good idea to discuss training options with potential employers.

Upon hiring, flight attendants take their training. Some airlines assign a monthly schedule. New flight attendants often work in casual positions. Some must work reserve duty—they are on call 24 hours a day except free days. They may have 10 or more free days each month.

As flight attendants gain seniority, they receive a schedule for a month in advance. Seniority determines:

Flight attendants may advance to a supervisory position, such as purser. Or they move up to:

Competition for senior positions is strong.

In the 6522: Pursers and flight attendants occupational group, 95.4% of people work in:

In Alberta, the 6522: Pursers and flight attendants occupational group is expected to have a below-average annual growth of 1% from 2019 to 2023. In addition to job openings created by employment turnover, 39 new positions are forecasted to be created within this occupational group each year.

Flight attendant trainees receive a training salary. The airline may repay them for hotel and meal expenses while away.

Most airlines repay hotel and meal expenses during stops away from home, but not all pay for non-flying time. Some pay a per diem on top of salary for the overall costs of overnight stays. Flight attendants usually get discounts on personal travel with the airline they work for.