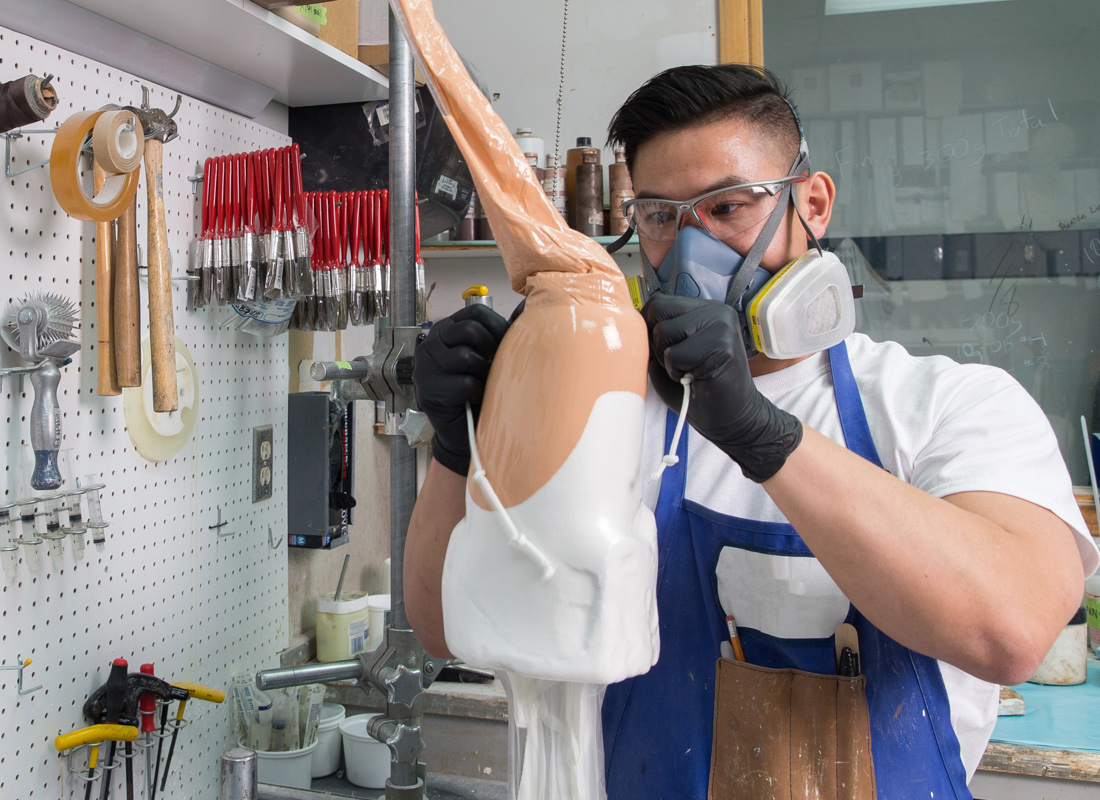 Prosthetic and Orthotic Technician: Occupations in Alberta - alis
Does working with precision instruments appeal to you? Can you solve problems and pay attention to details? Do you like being of service to others? Then go out on a limb and investigate a career as a prosthetic and orthotic technician.
Choose a guide...

Interest in precision working with machine and hand tools to repair, rebuild and modify prosthetic and orthotic appliances and orthopedic footwear and to fit, adjust and repair appliances

Interest in analyzing information taken from body and limb measurements to build prosthetic and orthotic appliances using a variety of materials such as metals, plastics and leathers

Interest in speaking with patients to ensure that prosthetic and orthotic appliances fit comfortably during trial fittings; and in building custom-designed components and appliances as directed

Prosthetic and orthotic technicians work in private clinics, hospitals, and rehabilitation centres. They may also work in laboratories that specialize in making or supplying these devices. The work involves standing at workbenches while using machinery. Machines can include grinders, sanders, buffers, drill presses, lathes, welding equipment, and sewing machines.

Technicians may need to lift heavy items such as plaster bags or sheets of plastic. These may weigh up to 40 kilograms.

They must follow current policies, procedures, and fabrication standards. They may work under deadline pressure. They may need to adapt schedules to accommodate emergency services.

This chart shows which job skills are currently in highest demand for this occupational group. It was created using this occupation's 85 most recent Alberta job postings, collected between Oct 27, 2021 and Dec 09, 2022.

Prosthetic and orthotic technicians need a high school diploma or equivalent. Some employers require candidates to have a post-secondary accredited diploma. They may learn on the job or have a combination of education and on-the-job training. Education in human kinetics, biology, and physics is an asset.

No legislation currently regulates this occupation. However, orthotic or prosthetic technicians can register with the Canadian Board for Certification of Prosthetists and Orthotists (CBCPO). They can register through Orthotics Prosthetics Canada (OPC).

Prosthetic and orthotic technicians work for:

In large organizations, experienced technicians may advance to supervisory positions.

Prosthetic and orthotic technicians are part of the larger 2011 National Occupational Classification 3219: Other Medical Technologists and Technicians (Except Dental Health). In Alberta, 95% of people employed in this classification work in the following industries:

In Alberta, the 3219: Other medical technologists and technicians (except dental health) occupational group is expected to have an above-average annual growth of 2% from 2019 to 2023. In addition to job openings created by employment turnover, 96 new positions are forecasted to be created within this occupational group each year.

Salaries for prosthetic and orthotic technicians vary widely from province to province. However, salaries increase for technicians who register with an accredited body such as the Canadian Board for Certification of Prosthetists and Orthotists.

For information about current collective agreements in the public and not-for-profit sectors, see the Health Sciences Association of Alberta website.