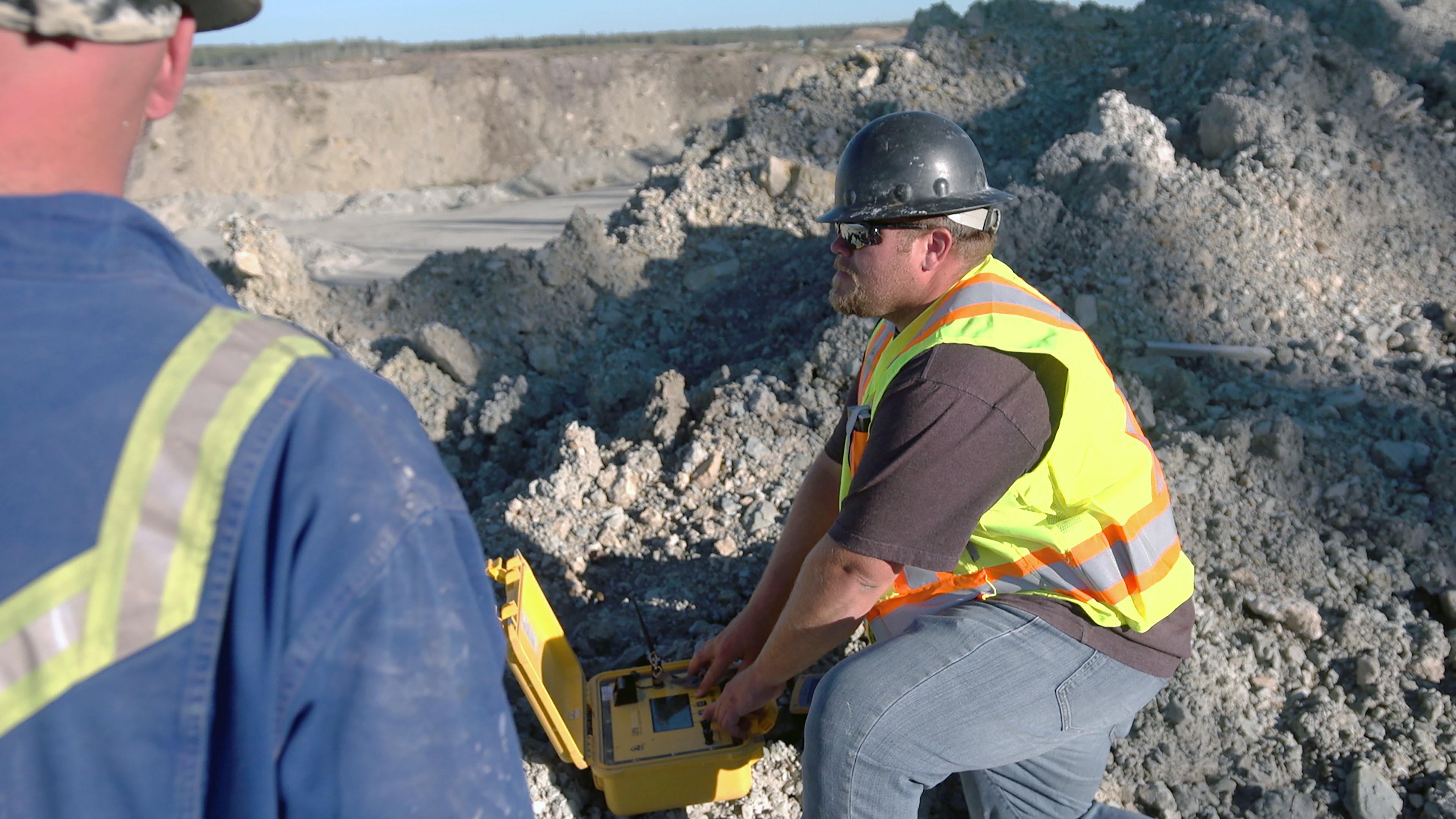 Blaster: Occupations in Alberta - alis
Do you have a safety-first attitude? Do you like excitement and have an interest in explosives? Then you may want to find out if a career as a blaster sparks your interest.
Choose a guide...

Blasters break up rock and demolish structures by placing and detonating explosives.

Interest in precision working to connect electrical wires, detonating cords and fuses into series, and to connect the series to blasting machines; may operate air-track, rotary, down-the-hole and other drilling machines

Duties vary depending on the industry on which blasters are employed. For information about blasting-related operations in the oil and gas industry and related services, see the Wireline Operator occupational profile.

In general, blasters employed in the oil and gas, mining, quarrying or construction industries:

Blasters may direct drilling activities or operate air-track, rotary, down hole or other drilling machines to drill blast holes.

In the construction industry, blasters break up rock and soil, dislodge tree stumps and demolish structures such as buildings or bridges. To avoid damaging surrounding terrain or structures via ground vibration or flying debris, blasters often use a series of small, precise, timed detonations instead of one large explosion.

In the mining industry, blasters prepare and blast large quantities of rock to improve mine equipment efficiency. Some mining blasts break up hundreds of thousands of tonnes of rock in one blast. Such blasts often involve the preparation and use of thousands of kilograms of pre-packaged or bulk explosives.

Lifting up to 20 kilograms is required.

Those employed in underground mines also must be able to work in confined spaces.

All blasters should enjoy:

Blasters start in entry level positions and advance to more responsible positions as they gain experience. For example, they may start as labourers or heavy equipment operators (for more information, see the Construction Craft Worker and Heavy Equipment Operator occupational profiles). Employers may prefer to hire applicants who have a high school diploma or related experience.

In the oil and gas industry blasters require:

Blasters may be trained on the job as blaster helpers or take related courses before moving into blasting positions. In Alberta, approved blaster safety training courses are offered by companies listed on Alberta Labour and Immigration’s Occupational Health and Safety website.

Due to the size and quantity of explosives used and the number of people potentially exposed to blasting hazards, detailed knowledge of safe work practices and related explosive manufacturers' specifications is essential for blasters in the mining industry.

Blasters place and detonate explosives. They may work in the oil and gas, mining, quarrying or construction industries.

For information on what you need and other details, visit the certification profile Blaster.

Blasters in the oil and gas, construction, mining and quarrying industries are employed by:

Blaster is not an entry-level position. Experienced blasters may advance to supervisory positions but, without additional education or training, further advancement is limited.

In the 7372: Drillers and blasters - surface mining, quarrying and construction occupational group, 88.6% of people work in:

In Alberta, the 7372: Drillers and blasters - surface mining, quarrying and construction occupational group is expected to have a below-average annual growth of 0% from 2019 to 2023. In addition to job openings created by employment turnover, 0 new positions are forecasted to be created within this occupational group each year.