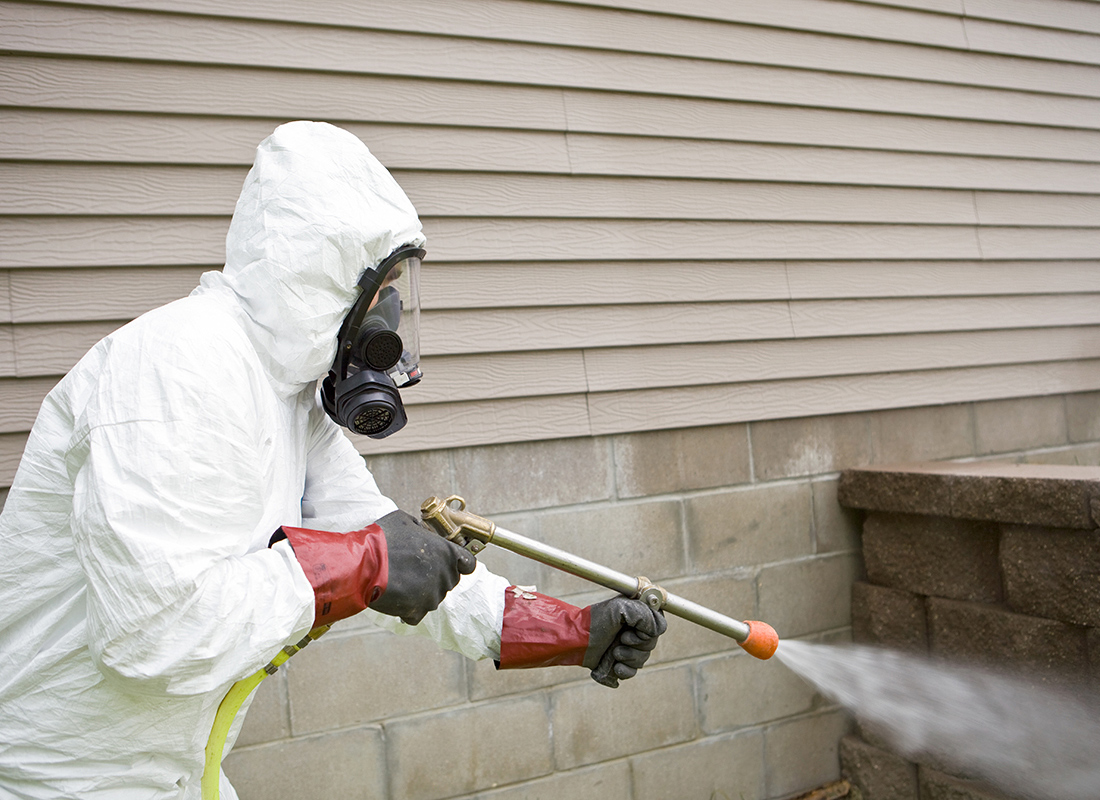 Structural Pesticide Applicator: Occupations in Alberta - alis
Are you undaunted by spiders and mice? Do you like to work with clients to get a job done? Do you crave variety in your working day? Then you may want to apply yourself to a career as a structural pesticide applicator.
Choose a guide...

Structural pesticide applicators use a variety of methods to control and prevent the spread of insects and other pests that may infest private homes, restaurants, warehouses, business establishments, and surrounding areas.

Interest in operating mechanical and electric sprayers; and in preparing and spraying chemical mixtures on infested areas

Interest in comparing information to determine type of treatment required; and in cleaning out areas using rakes, shovels, brooms and mops

In general, structural pesticide applicators determine how and where to control pests on clients’ property. They:

Since they use toxic materials and chemicals, structural pesticide applicators must take safety precautions. These include:

Structural pesticide applicators generally have assigned routes. On that route, they are responsible for sales work, informing customers about conditions that attract pests, and conducting periodic inspections to detect signs of possible re-infestation.

Insects, rodents, and birds are most active in spring and summer, so structural pesticide applicators are busiest during those seasons.

Regular weekday work is typical. But because public buildings need to be closed before pesticide can be applied, evening and weekend shifts are the norm for public facilities.

Indoors, structural pesticide applicators work in a variety of settings. Outdoors, they encounter all kinds of weather. Occasionally, they may have to crawl into dirty or dusty places to check infestation sources and administer treatments. They may also have to lift heavy items. Safety precautions are a standard part of the job when handling toxic materials.

This chart shows which job skills are currently in highest demand for this occupational group. It was created using this occupation's 18 most recent Alberta job postings, collected between Nov 16, 2021 and Sep 30, 2022.

Structural pesticide applicators are trained on the job.

Employers generally prefer to hire applicants who are at least 18 years of age and have a high school diploma with courses in biology. A valid driver’s licence is often required. Sales experience is an asset.

This occupation has federal and provincial regulations. For details about the federal requirements, visit the Pest Management Regulatory Agency (PMRA) website.

Pesticide applicators use pesticides (chemicals) to control pests, such as weeds, diseases or destructive insects or animals, as part of their paid employment.

Pesticide dispensers sell and store pesticides as part of their paid employment.

Under Alberta’s Environmental Protection and Enhancement Act [pdf] and Pesticide (Ministerial) Regulation [pdf], to apply a commercial-class pesticide such as insecticide, herbicide or fungicide you must be one of the following:

To sell pesticides you must be a certified dispenser. The 2 types of dispensers in Alberta are:

For information on what you need and other details, visit the certification profile Pesticide Applicator and Dispenser.

Most structural pesticide applicators work for privately owned and operated pest control firms. There are also opportunities with municipal government departments that oversee recreational facilities and other municipal buildings.

With experience, structural pesticide applicators can move up into supervisory, management, or trainer positions. Self-employment also is an option. This is, however, a highly competitive field.

Structural pesticide applicators are part of the larger 2011 National Occupational Classification 7444: Pest Controllers and Fumigators. In Alberta, 75% of people employed in this classification work in the following industries:

In Alberta, the 7444: Pest controllers and fumigators occupational group is expected to have a below-average annual growth of 0% from 2019 to 2023. In addition to job openings created by employment turnover, 0 new positions are forecasted to be created within this occupational group each year.

Salaries for structural pesticide applicators vary depending on location and the applicator’s qualifications. Those working with private-sector companies may be paid commissions for the new business they attract.

Business, Building and Other Support Services
ALL INDUSTRIES
Public Administration