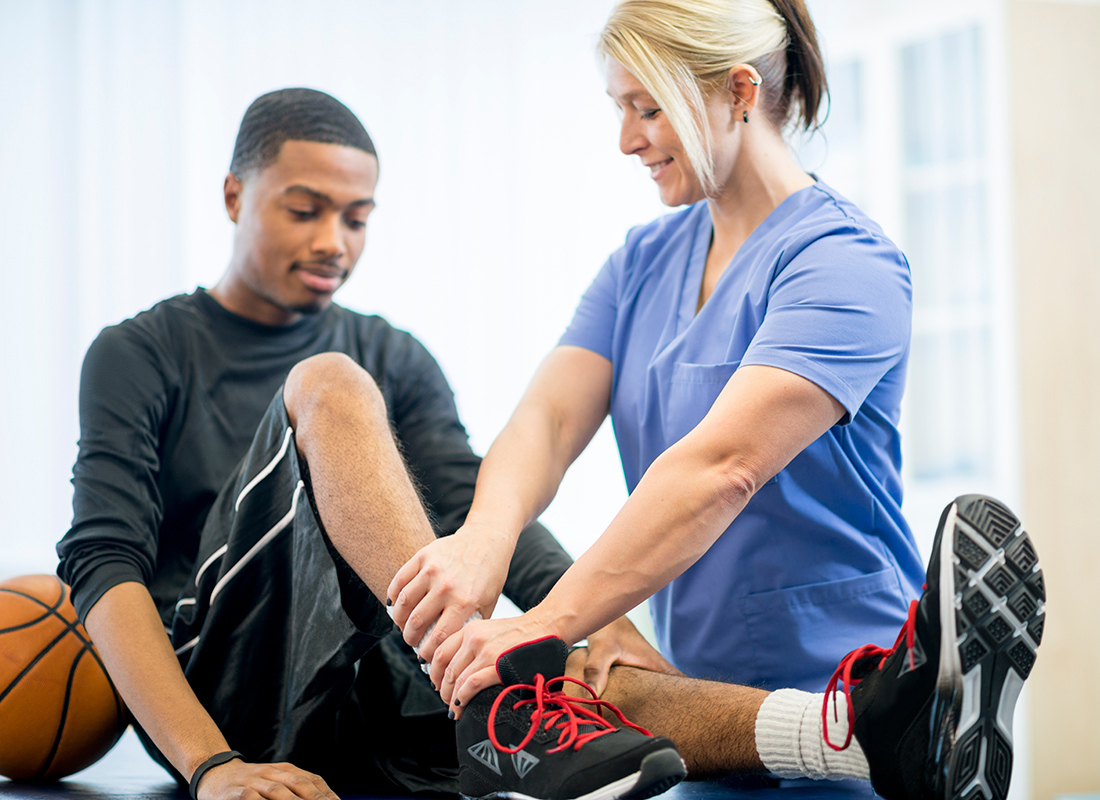 Athletic Therapist: Occupations in Alberta - alis
Do you love sports and working with athletes? Are you eager to help players recover from injuries? Then you may want to train for a career as an athletic therapist.
Choose a guide...

Athletic therapists are experts at injury assessment, prevention, and rehabilitation. They provide care and reconditioning for active individuals.

Other Professional Occupations in Therapy and Assessment

Interest in mentoring patients by providing treatment and advising them on how to deal with their mental and physical abilities; and in consulting with other health care professionals to evaluate treatment plans

Interest in co-ordinating, initiating, designing and implementing specialized therapy programs for the general patient population and in the community; may conduct research in respective field of specialization

Interest in operating - manipulating equipment and following procedures to implement treatment plans by carrying out specialized therapy sessions employing techniques such as art, athletic, dance, music or recreational therapy or remedial gymnastics; and in observing and analyzing patients during treatment sessions

Athletic therapists are responsible for injury prevention, emergency and acute care of injuries, and assessment and rehabilitation. They also develop conditioning programs. Most provide on-field and clinical care of musculoskeletal injuries for professional and recreational athletes. Their goal is to help clients return to sport and recreation activities safely.

Athletic therapists also work preventively. They help athletes and active individuals learn how to avoid injury. They also help them improve their physical abilities and make their lifestyles more active. They sometimes work with the public too. For example, they may help seniors recover after surgery to replace a hip or knee.

Athletic therapists may perform some or all of the following duties:

For athletic therapists in private practice, hours of work and other working conditions vary depending on the clinic.

Athletic therapists who work with professional sports teams work long and physically demanding hours. They must be present at all competitions and practices. Depending on the sport, this may require frequent travel or evening and weekend work.

They should enjoy working with people, designing therapy programs, and using equipment to implement treatment plans.

This chart shows which job skills are currently in highest demand for this occupational group. It was created using this occupation's 37 most recent Alberta job postings, collected between Nov 03, 2021 and Sep 27, 2022.

To work as an athletic therapist, employers require applicants to be certified by the Canadian Athletic Therapists Association (CATA). This includes successful completion of a bachelor’s degree and an Athletic Therapy program at a CATA-accredited school. For more details, see Certification Requirements and the CATA website.

To apply for certification, candidates must:

Athletic therapists may work as rehabilitation specialists, return-to-work specialists, or non-physician experts. They may work on their own or with other health care professionals. These can include family physicians, orthopedic surgeons, chiropractors, massage therapists, or physiotherapists.

In the 3144: Other professional occupations in therapy and assessment occupational group, 84.8% of people work in:

In Alberta, the 3144: Other professional occupations in therapy and assessment occupational group is expected to have an above-average annual growth of 3.8% from 2019 to 2023. In addition to job openings created by employment turnover, 56 new positions are forecasted to be created within this occupational group each year.