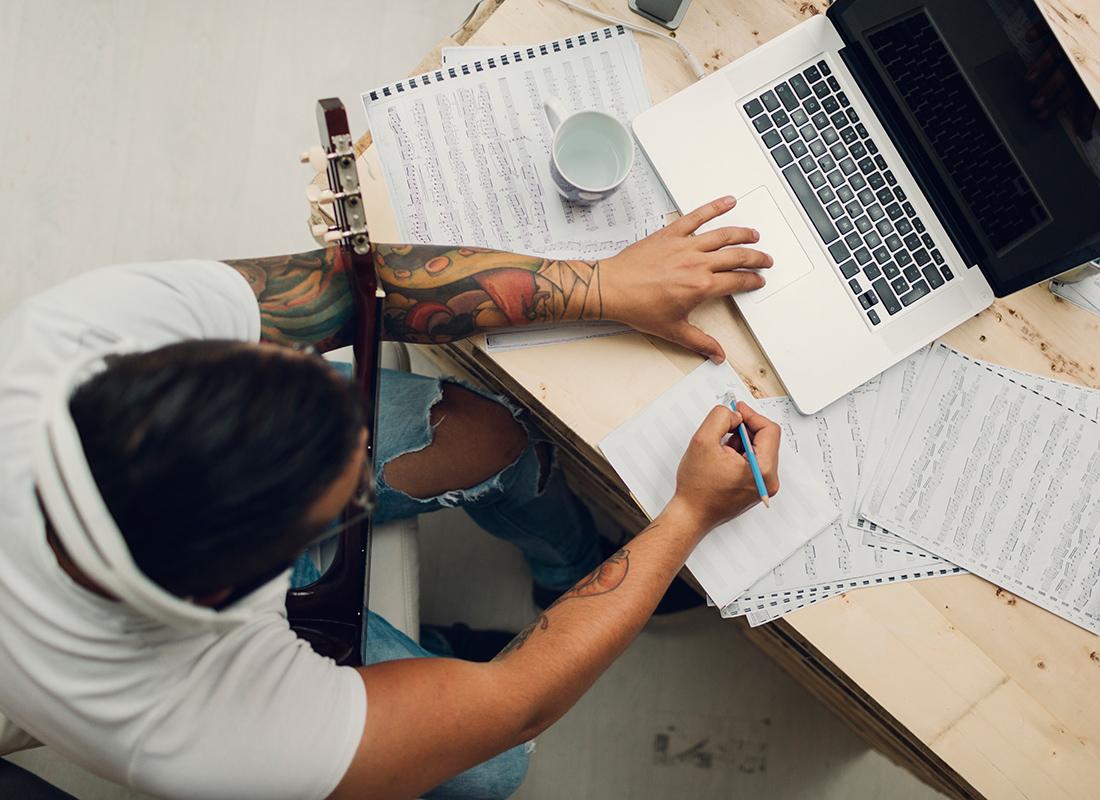 Composer: Occupations in Alberta - alis
Are you creative? Are you passionate about music? Then you may want to see if a career as a composer strikes a chord for you.
Choose a guide...

Interest in synthesizing information to invent melodic, harmonic and rhythmic structures in order to express ideas and emotions in musical forms such as symphonies, operas, and film and play scores

Interest in precision working to play instruments to assist in composing, arranging and orchestrating music; and in copying compositions to music paper

Interest in applying knowledge of harmony, counterpoint, orchestration and musical forms to create compositions and scores; may conduct and teach music

Composers write music pieces that may range in length and difficulty from 30-second radio jingles to symphonies. Once a music piece is created, a composer either produces a recording of it, or ensures the piece can be performed by others by creating accurately annotated sheet music for each instrument involved in the piece. They generally have no other specific duties unless they:

Composers often develop a style of their own, but may produce music in other styles when required by clients. For example, they may be commissioned to compose music for a live dance performance, a new symphony, or a film or television soundtrack. They may work closely with artistic directors, film editors, arrangers, conductors or music copyists to complete final scores, or with performers in rehearsals and recording sessions.

Film and television composers study films and scripts and work with producers and directors to define the nature and placement of the music so that it creates the desired effect.

Increasingly, composers use computer software and synthesizers to independently produce complex music scores, to orchestrate and to create new arrangements, and to output sheet music.

Most of the time, composers work alone when creating the initial concepts. Composers must also work collaboratively with their clients to receive feedback and create revisions before arriving at the finished piece. Their working environments may vary from very basic at-home locations to professional sound and recording studios. Their hours of work may also vary considerably, due to uncommon times of inspiration or communicating with clients remotely in different time zones.

They should enjoy playing musical instruments and inventing melodic, harmonic and rhythmic structures to express ideas and emotions. They should also enjoy working collaboratively with others.

To succeed, composers must:

The ability to play a musical instrument is a definite asset, as is knowledge of related technologies such as Musical Instrument Digital Interface (MIDI) software and music notation programs. Composers of classical music also may need to understand other languages such as Italian, French or German.

Composers of popular music (for example, country and rock) often do not have extensive formal training. They may study alone, at a music conservatory or a college, or with accomplished musicians. For related information, see the Songwriter occupational profile.

For composers of concert music, developing a unique style is crucial. This requires listening to as much music as possible, studying scores from various musical styles, experimenting and gaining experience.

Post-secondary education in music provides excellent training and exposure to different musical styles. Most serious composers pursue further studies at a university or music conservatory. Some apprentice with a recognized, accomplished composer as part of their post-graduate training.

Few composers earn a living from composition work alone. To supplement their incomes, many do related work including:

Composers may be commissioned by a major arts organization or a provincial arts funding source to write a piece of music. There is considerable competition for grants and commissions.

Music publishers may be interested in listing new pieces of original music in their catalogues. However, many Canadian composers have begun publishing their own works to retain control over publishing and distribution. Some composers use a music agent to negotiate contracts and agreements.

Composers are part of the larger 2011 National Occupational Classification 5132: Conductors, composers and arrangers. In Alberta, 89% of people employed in this classification work in the following industries:

Composers often negotiate their fees directly with employers. Fees vary widely and are not necessarily based on experience.

The Canadian League of Composers pays a flat per-minute rate to composers of commissioned works. The composer's reputation and talent determine the fee for most long commissioned pieces.

Composers are paid royalties from performances of their music. Royalties are collected and distributed by the Society of Composers, Authors and Music Publishers of Canada (SOCAN).