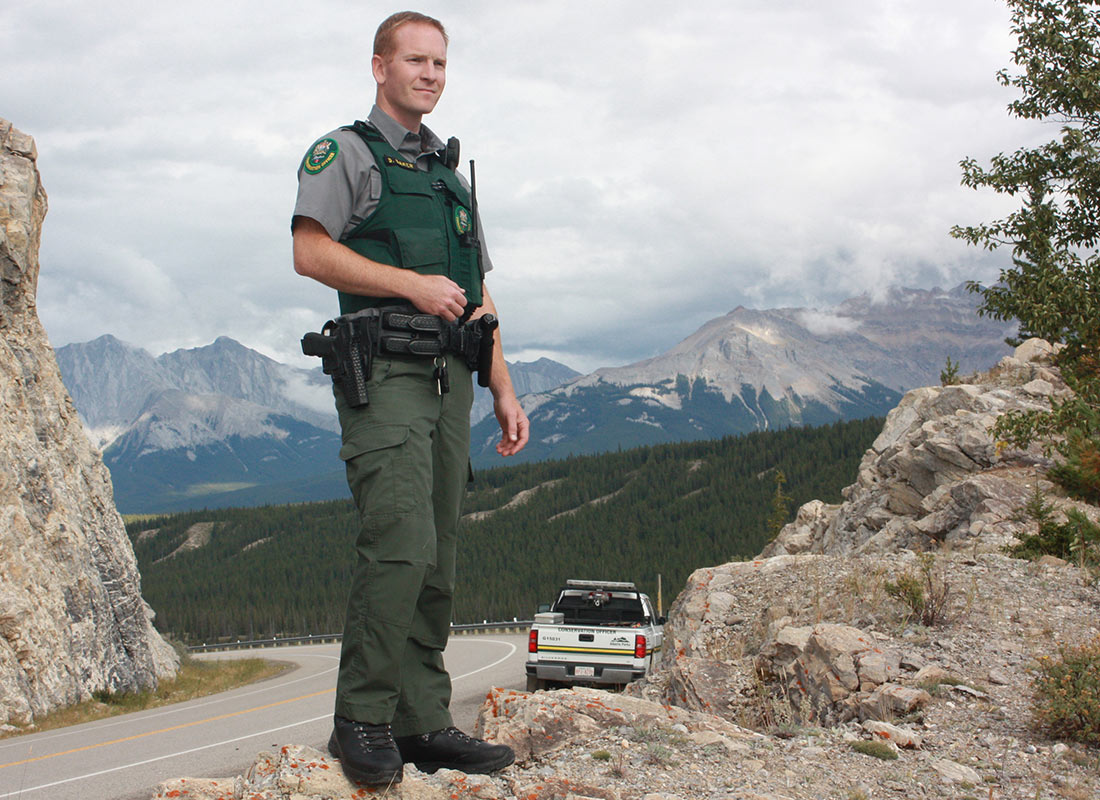 Conservation Officer: Occupations in Alberta - alis
Are you passionate about protecting the environment? Do you have strong people skills? Do you love being outdoors? Do you deal effectively with difficult situations? Then you may find being a conservation officer is a natural career choice.
Choose a guide...

Conservation officers protect and manage natural resources and visitors in parks and on public lands.

Interest in driving - operating to conduct patrols by truck, aircraft, boat or on foot to ensure compliance with provincial and federal statutes relating to fish, wildlife and the environment; and in implementing and supervising approved techniques in preventing and overcoming damage caused by wildlife

Interest in compiling information when investigating complaints and arresting violators; and in gathering resource data by making inventories of fish, collecting water samples and assisting biologists in scientific research

Interest in speaking with the public to generate awareness of fish and wildlife conservation and regulations; and in supervising or providing firearms safety training courses and trapper education courses

A conservation officer’s duties and responsibilities vary. In general, they:

Conservation officers frequently patrol their areas by truck, foot, boat, off-highway vehicle (OHV) and sometimes by plane, snowmobile, skis, or horseback. They watch for potential hazards and assess the condition of the park, its wildlife, and its other natural resources.

Conservation officers are trained in first aid and lifesaving techniques and must take charge when visitors are lost, injured, or in danger. They work in cooperation with other first responders and law enforcement agencies to assist visitors in need.

Conservation officers work indoors and outdoors, sometimes in extreme weather, remote areas, or rough terrain. Risk may be involved in the management of wildlife and during the enforcement of legislation.

Hours of work include evenings, weekends, and holidays, and may include split shifts or standby shifts. Overtime may be required in order to respond to complaints or serious occurrences.

Lifting up to 10 kilograms is routinely required; lifting over 45 kilograms may be required in some circumstances.

You should enjoy conducting patrols, compiling information, and working with people.

Education equivalency will be considered. For example, a technical diploma or certificate in enforcement combined with a minimum of 2 years (24 months) directly related work experience.

Computer skills are a definite asset.

Applicants must be eligible for a Peace Officer appointment.

Conservation officers are expected to maintain current CPR and standard first- aid training and to have a valid Class 5 operator’s licence.

Conservation officers are employed by the Government of Alberta. They may be posted or transferred to districts across Alberta. Most officers are transferred at least once during their first few years of employment.

Experienced conservation officers may specialize in particular types of work or advance to supervisory positions.

Conservation officers are part of the larger 2011 National Occupational Classification 2224: Conservation and fishery officers. In Alberta, 91% of people employed in this classification work in the following industries:

In Alberta, the 2224: Conservation and fishery officers occupational group is expected to have a below-average annual growth of 0% from 2019 to 2023. In addition to job openings created by employment turnover, 0 new positions are forecasted to be created within this occupational group each year.

Updated Sep 25, 2019. The information contained in this profile is current as of the dates shown. Salary, employment outlook, and educational program information may change without notice. It is advised that you confirm this information before making any career decisions.