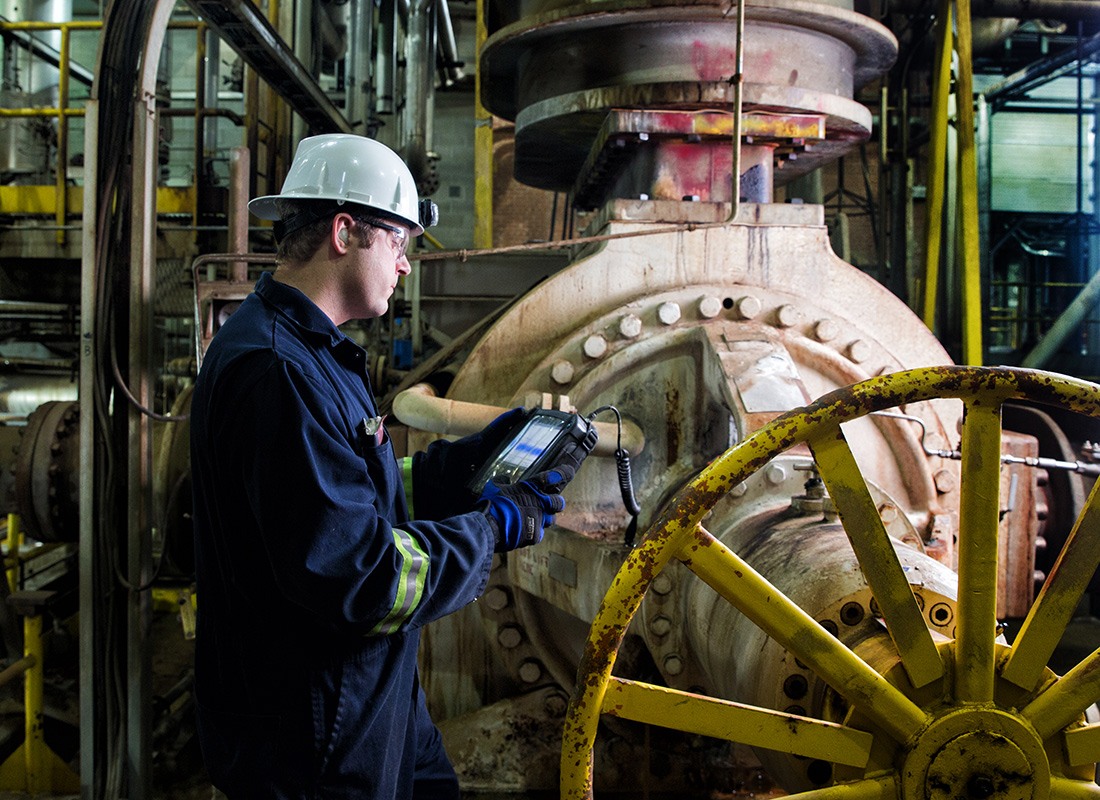 Industrial Mechanic (Millwright): Occupations in Alberta - alis
Do you see yourself as a craftsperson? Do you like rebuilding or fixing machinery? Then you may want to work on a career as an industrial mechanic (millwright).
Choose a guide...

Interest in analyzing information to inspect and examine machinery and equipment to detect and investigate irregularities and malfunctions, to adjust machinery and to repair and replace defective parts; and in installing, trouble-shooting and maintaining power transmission, vacuum, hydraulic and pneumatic systems, and programmable logic controls

Interest in speaking with other workers to direct them in constructing foundations for machinery; and in cleaning, lubricating and performing other routine maintenance work on machinery

On a typical job, industrial mechanics (millwrights) read diagrams and schematic drawings as well as service manuals to determine work procedures. They also:

They may do some fabrication and tack welding (to temporarily hold components in place until they can be welded by qualified personnel), and maintain an inventory of replacement parts. Sometimes they supervise the work of others.

Industrial mechanics (millwrights) may find themselves primarily in construction work or plant maintenance, or doing a combination of both. They often work in close association with other trades people such as machinists, instrumentation and control technician, welders, electricians and steamfitter-pipefitters.

Working conditions vary from one job to another. On construction job sites, industrial mechanics (millwrights) are exposed to a variety of weather conditions. In plant maintenance, they may work indoors and outdoors. Hours of work also vary, and shift work and some overtime may be required.

The work environment may be noisy and there is some risk of injury when working with heavy machinery, so there is a strong emphasis on safety. Industrial mechanics (millwrights) may be required to lift and move items that weigh over 25 kilograms.

They should enjoy variety and doing precision work with machinery and equipment.

This chart shows which job skills are currently in highest demand for this occupational group. It was created using this occupation's 100 most recent Alberta job postings, collected between May 16, 2022 and Dec 07, 2022.

To work in Alberta, an industrial mechanic (millwright) must be ONE of the following:

The term of apprenticeship is 4 years (four 12-month periods) that include a minimum of 1,560 hours of on-the-job training and 8 weeks of classroom instruction each year.

High school students can earn credits toward apprenticeship training and a high school diploma at the same time through the Registered Apprenticeship Training Program (RAP). Applicants who have related training or work experience may be eligible for admission, credit, or certification. Credits may reduce the period of apprenticeship.

Industrial mechanic (millwright) apprentices may take the interprovincial exam in the final period of their apprenticeship training to earn a Red Seal (certification recognized in most parts of Canada).

For information on what you need and other details, visit the certification profile Industrial Mechanic (Millwright).

Industrial mechanics (millwrights) are employed by manufacturing, processing and construction companies, as well as places such as amusement parks and ski hills. Those working in construction may experience periods of unemployment.

Industrial mechanics (millwrights) are exposed to the duties involved in a variety of other trades, which means they are good candidates for promotion to supervisory and superintendent positions.

In Alberta, the 7311: Construction millwrights and industrial mechanics occupational group is expected to have a below-average annual growth of 1.3% from 2019 to 2023. In addition to job openings created by employment turnover, 117 new positions are forecasted to be created within this occupational group each year.

Journeyperson industrial mechanics (millwrights) wage rates vary but generally range from $30 to $45 an hour plus benefits (2019 estimates). Apprentices earn at least 60% of the journeyperson wage rate in their place of employment in the first year, 70% in the second, 80% in the third and 90% in the fourth.