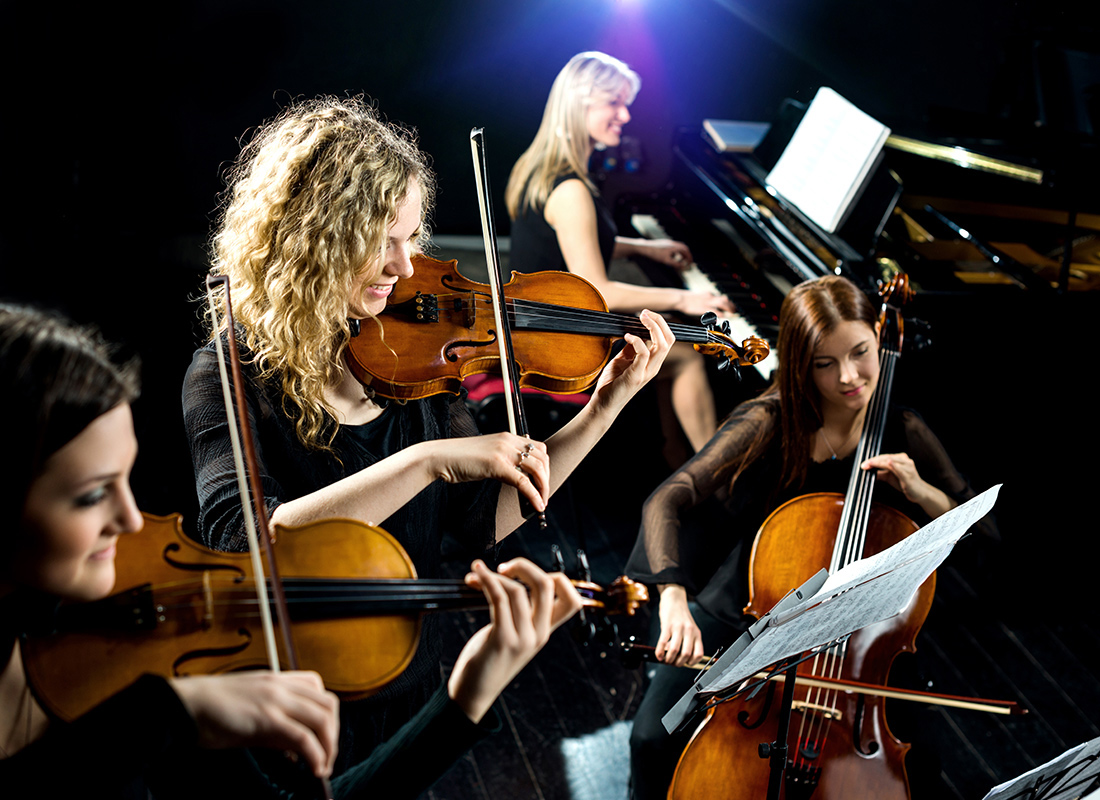 Instrumental Musician: Occupations in Alberta - alis
Are you passionate about music and entertainment? Do you like performing in public? Are you disciplined and confident? Then you may want to tune up for a career as an instrumental musician.
Choose a guide...

Instrumental musicians play musical instruments. They perform as soloists or with orchestras, small ensembles or popular bands before live audiences, in recording studios or in workshop situations.

Interest in precision working to play instruments by manipulating keys, bow, valves, strings or other parts of instruments

Instrumental musicians usually specialize in 1 instrument or 1 type of instrument (for example, string, wind, brass or percussion instruments). They play almost every day, practicing on their own or in rehearsals with other musicians and singers or in live performances or recording sessions. They may be required to:

To expand their musical repertoire, musicians are constantly learning new pieces. However, they may choose to play several standard pieces repeatedly, depending on the instrumental group, audience or setting. They may:

As musicians become established, they may work with a variety of people. These may include:

Instrumental musicians work long hours. Practices and rehearsals usually are held during the day. Live performances often take place during evenings and weekends. Recorded performances happen at various times, depending on when studios have recording studio time available. It is common for musicians to travel on tour or wherever they can find work (clubs, taverns and concert halls).

They may be required to lift and carry instruments and accessories weighing up to 10 kilograms. Electronic audio and related equipment may weigh considerably more.

Since the music industry is a very competitive business, musicians need to be:

This chart shows which job skills are currently in highest demand for this occupational group. It was created using this occupation's 25 most recent Alberta job postings, collected between Nov 30, 2021 and Feb 07, 2023.

In addition to musical talent, musicians need good business skills and a working knowledge of the music and entertainment business. In particular, they need to know how to keep records, negotiate contracts, stay financially afloat and promote themselves.

Classical musicians usually start training at an early age on the piano or a stringed instrument. Most brass, percussion and wind instrument players begin their music studies in elementary or junior high school. Some musicians are self-taught.

Formal music training of some kind is required to sight-read music and understand music theory, harmony and improvisation. Knowledge of related technologies, such as musical instrument digital interface (MIDI) software and music notation programs, is an asset.

Once students have developed a certain level of competence on an instrument, they may audition for community bands and orchestras to gain experience playing in a group with a musical director or conductor.

Another way for musicians to test their performance skills is to enter music competitions. This is also a good way to gain recognition and exposure, and sometimes earn money by winning scholarships and awards. For popular musicians, winning a major talent contest may provide the opportunity to produce a professional recording or music video.

As online video streaming for entertainment grows, it is increasingly important for musicians to know how to perform on camera. At some point in their careers, successful popular musicians usually need to produce and post a music performance video online to gain wider recognition. It also is important to be computer literate because music recording and mixing equipment often is digital.

Instrumental musicians must audition to find work. Classical musicians who perform mostly with symphony orchestras and small ensembles audition in front of committees made up of musicians and the music director. Popular musicians (for example, jazz, rock, country and folk musicians) often send demo recordings (or web links to them) to booking agents, bar and nightclub owners and entertainment promoters. Once musicians have established their reputations, they may be called to play at specific bookings or recording sessions.

The music industry is very competitive. Talent, versatility and flexibility in accepting work away from home are crucial for maintaining a viable career. Being able to play more than 1 instrument is a definite asset. Freelance and popular musicians who play in recording sessions usually are able to play several different styles of music. Those who, through hard work and good luck, sign contracts with recording companies may record their own songs or cover other people’s tunes. Independent recording artists may market their products and services via the Internet.

Some musicians work as accompanists for other performers or choral groups.

Classical musicians may work with:

When they have passed all the requirements for orchestral positions, classical musicians may be offered yearly contracts with insurance and pension benefits. Employment in an orchestra requires musicians to perform at a high level with sometimes limited rehearsal time.

In Alberta, the 5133: Musicians and singers occupational group is expected to have an above-average annual growth of 2.1% from 2019 to 2023. In addition to job openings created by employment turnover, 58 new positions are forecasted to be created within this occupational group each year.

Many musicians are members of the American Federation of Musicians (AFM) of the United States and Canada. This association sets minimum wage guidelines with different fee schedules for different settings. For example, side musicians for top recording artists earn substantially more than members of small rock bands playing in hotel bars.

American Federation of Musicians (AFM) of the United States and Canada website: www.afm.org