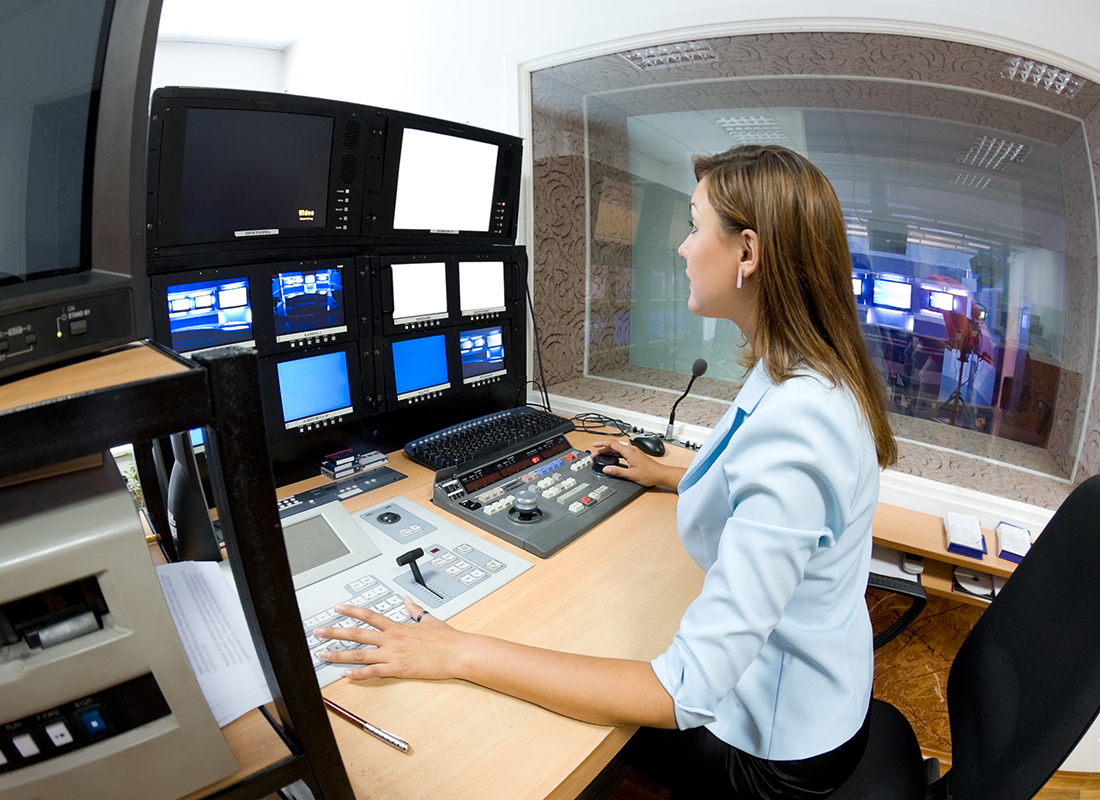 Television Audio/Video Operator: Occupations in Alberta - alis
Do you like mixing sounds and images? Can you handle deadlines? Are you artistic and good with computers? Then you may view a career as a television audio or video operator as a choice for you.
Choose a guide...

Create New Guide What is an alis guide?
Close
Occupations in Alberta
©
iStockphoto/withgod

Interest in mixing, combining and editing music and sound at concerts and live events, and synchronizing edited dialogue, music and sound effect tracks from different sources

Audio operators set up, prepare, operate and adjust audio recording, editing and reproducing equipment at television stations and remote broadcast locations. In general, they work at audio consoles or with computers to:

During a production or broadcast, audio operators bring in required sound elements at pre-determined times. Sometimes, they must co-ordinate a number of audio feeds with a television picture. Feeds may include pre-recorded material, records, compact discs (CDs), digital audio devices and videotapes as well as inputs from live microphones, satellites or microwave trucks.

Videotape operators prepare and operate videotape and non-linear computer equipment and work with a variety of audio and video formats at television stations and remote broadcast locations. In general, they:

During production, videotape operators monitor the sound and picture being recorded and inform the director about malfunctions that might affect the quality of the recorded program. During news productions, they play back all video and sound elements required in the program.

Master control operators monitor, record and play back all signals and programs entering and leaving a station. With the introduction of computerized editing and recording equipment, videotape and master controls often are combined.

Switchers work at an electronic console in a control room where they select video sources specified by the director during television videotaping sessions and live broadcasts. Switchers integrate program components from sources such as live cameras, videotape, video servers, and special effects and graphic equipment. In general, switchers:

At some television stations, switchers also may direct television productions.

Video editors use non-linear editing systems to blend video recordings together and add video effects, music and audio effects. In general, they:

Graphics operators use computer software to generate opening titles, subtitles and closing credits and may design graphic backgrounds and animations as well. In general, they:

Advancements in graphics technology have made it possible for electronic video graphic operators to produce increasingly sophisticated graphics including 3-dimensional animation.

Depending on their responsibilities, audio and video equipment operators may work entirely at a station or at various remote locations. Most operators work rotating shifts that include afternoons, evenings, weekends and holidays. Coping with tight schedules and deadlines can be stressful.

They should enjoy using electronic equipment to perform precision tasks and troubleshooting problems.

This chart shows which job skills are currently in highest demand for this occupational group. It was created using this occupation's 14 most recent Alberta job postings, collected between Nov 18, 2021 and Feb 01, 2023.

Competition is keen in the broadcasting field so new graduates often start at small stations and work in a number of different areas. An interest in music and related experience are definite assets.

Freelancing has become the trend in broadcasting. Increasingly, freelancers are producing programming for new channels as well as existing ones. Contract employment also can be found producing in-house programs such as corporate videos (for example, for safety and technical training, recruiting, sales or marketing). To be successful, freelancers must be talented but also able to establish a network of contacts and make themselves available when needed. A significant investment in equipment may be required to compete and maintain successful businesses.

Television audio and video operators are part of the larger 2011 National Occupational Classification 5225: Audio and video recording technicians. In Alberta, 75% of people employed in this classification work in the following industries:

In Alberta, the 5225: Audio and video recording technicians occupational group is expected to have a below-average annual growth of 0% from 2019 to 2023. In addition to job openings created by employment turnover, 0 new positions are forecasted to be created within this occupational group each year.

Salaries for audio and video operators vary depending on the size of the operation.

Updated Mar 05, 2021. The information contained in this profile is current as of the dates shown. Salary, employment outlook, and educational program information may change without notice. It is advised that you confirm this information before making any career decisions.