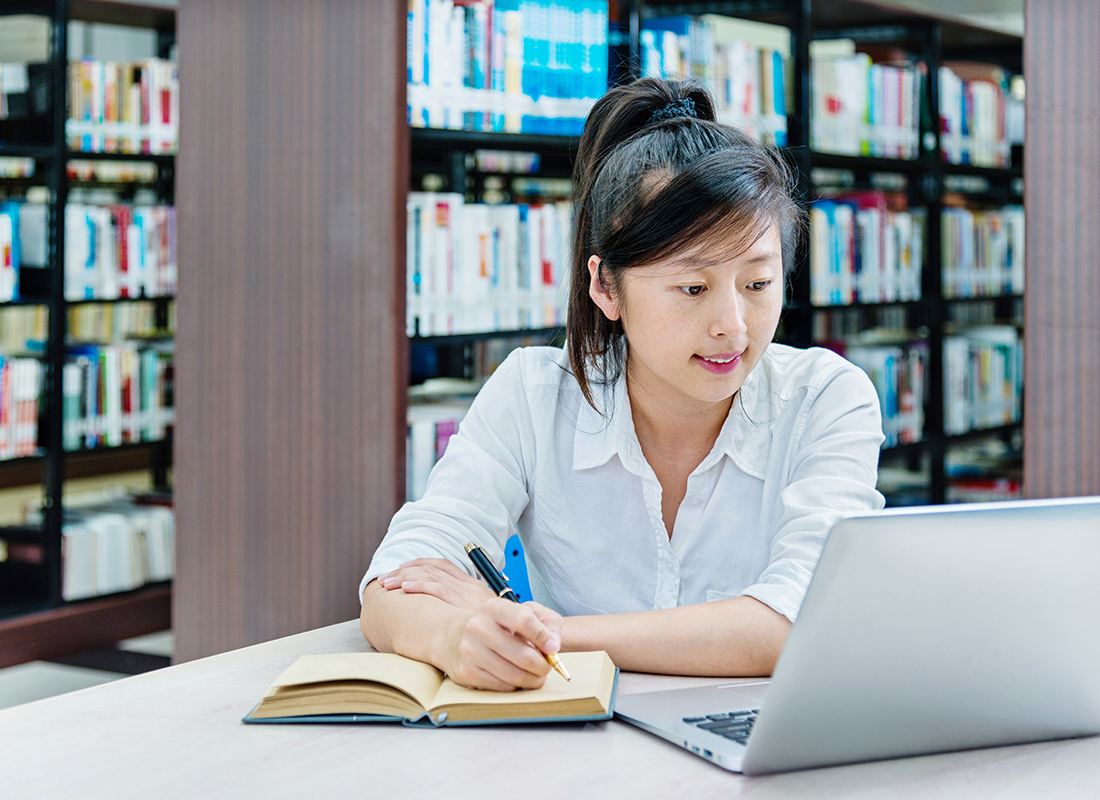 Creative Writer: Occupations in Alberta - alis
Do you have a way with words and love writing? Are you self-disciplined? Do you enjoy researching? Then you may want to captivate your audience as a creative writer.
Choose a guide...

Interest in synthesizing information to conceive and write novels, plays, scripts, poetry and other material for publication and presentation

Interest in diverting and entertaining an audience by choosing and developing themes, characters, plots and subjects of published and presented work

Creative writers compose fiction such as short stories, scripts, novels and poetry, or non-fiction such as articles, biographies and essays. In general, they:

Fiction writers often do a considerable amount of public relations work, such as book tours, signings and readings. Publishers may not fund promotional tours for authors who are not well known.

Scriptwriters often work closely with directors and producers to ensure accuracy. They may attend rehearsals for radio and theatre productions or taping sessions for their work in video.

Creative writers spend a lot of time on their own researching and writing at home or in an office. They are in regular contact with agents and publishers, and may spend time interviewing people.

Freelance writers set their own hours. The pressure of deadlines, long solitary hours, unwilling publishers, and sporadic work can be stressful.

Creative writers must be able to adapt to influences of the digital world on writing, producing, and marketing their work.

Creative writers come from a broad range of backgrounds. They need a solid grasp of grammar and spelling and must be able to use language accurately, effectively, and innovatively. Particularly when starting, writers may find writing groups, workshops, and conferences helpful for honing their research and writing skills and polishing their craft.

Post-secondary education does not ensure success, but it does help develop research, writing and organizational skills and leads to professional contacts. A related diploma or degree can translate into extra income by offering writers work in related occupations. For more information, see the Advertising Copywriter, Reporter, Technical Writer, and Editor occupational profiles.

English, communications, and other writing-related programs are offered by post-secondary schools throughout Alberta. Entrance requirements vary and may include a portfolio of written work, testing, or an interview.

Creative writing courses are offered by organizations such as the Canadian Authors Association, Banff Centre for Arts and Creativity, Writers’ Guild of Alberta, and Alberta Magazine Publishers Association. Additional programs may be offered by community-based writing organizations, the extension departments of colleges and universities, and the continuing education divisions of school systems.

Banff Centre for Arts and Creativity

Creative writers publish and market their work themselves or they submit their material to agents or publishers. Novelists and poets usually finish their first work before looking for a publisher. Some writers work with an agent to help them contact publishers. To be considered for publication, creative writers must write at a high standard. For non-fiction, they usually send query letters or proposals to editors before completing articles or books. Although some established television scriptwriters are assigned individual stories or entire series, most submit story ideas to producers hoping to get a contract for the finished script.

Fiction writers and poets often accept freelance or other writing offers, or they work in other occupations to supplement their income. Poets may sell their work to literary journals, greeting card companies or magazine publishers. They also may market their craft through book launches or websites.

Writers of magazine articles may freelance or be employed by the publishers of national, regional, or specialty magazines. Freelance periodical writers may sell an article to more than 1 magazine, but this requires good negotiation skills and a thorough understanding of copyright law.

Established writers may take on mentoring and teaching roles or go into editing.

Creative writers are part of the larger 2011 National Occupational Classification 5121: Authors and writers. In Alberta, 78% of people employed in this classification work in the following industries:

In Alberta, the 5121: Authors and writers occupational group is expected to have an above-average annual growth of 2.2% from 2019 to 2023. In addition to job openings created by employment turnover, 58 new positions are forecasted to be created within this occupational group each year.

Considering the number of hours or years they may spend on a piece before getting any financial return, writers often earn very little. In fact, there is no guarantee of any payment. Poetry in particular receives more admiration than financial reward. Many successful freelance writers supplement their incomes with teaching, editing or writing business or technical material. They may also do voice-overs (read scripts for radio), take on residency programs, or serve as visiting writers at schools. Established writers often apply for grants from government and arts organizations.

Freelancer writers must negotiate their own fees unless minimum rates of pay for writers have been set by a union such as the Alliance of Canadian Cinema, Television and Radio Artists (ACTRA) or the Canadian Freelance Guild.

Freelancers may be paid by the hour or by the word, with the latter being more common in magazines. Or they may be paid a flat rate. Freelance screenwriters usually are paid on a split-fee basis: one-third in advance, one-third after the first draft, and the balance upon completion.

Published writers of adult fiction generally receive a percentage of the total book sales, up to 10%. They may get an advance against royalties based on projected sales revenue, depending on the reputation of the writer and the book’s genre. Some common examples are history, business, reference, and children’s books.

According to the 2018 income survey from the Writers’ Union of Canada, the average salary for writers nationwide is declining. However, the trend for individual provinces and territories is unclear.