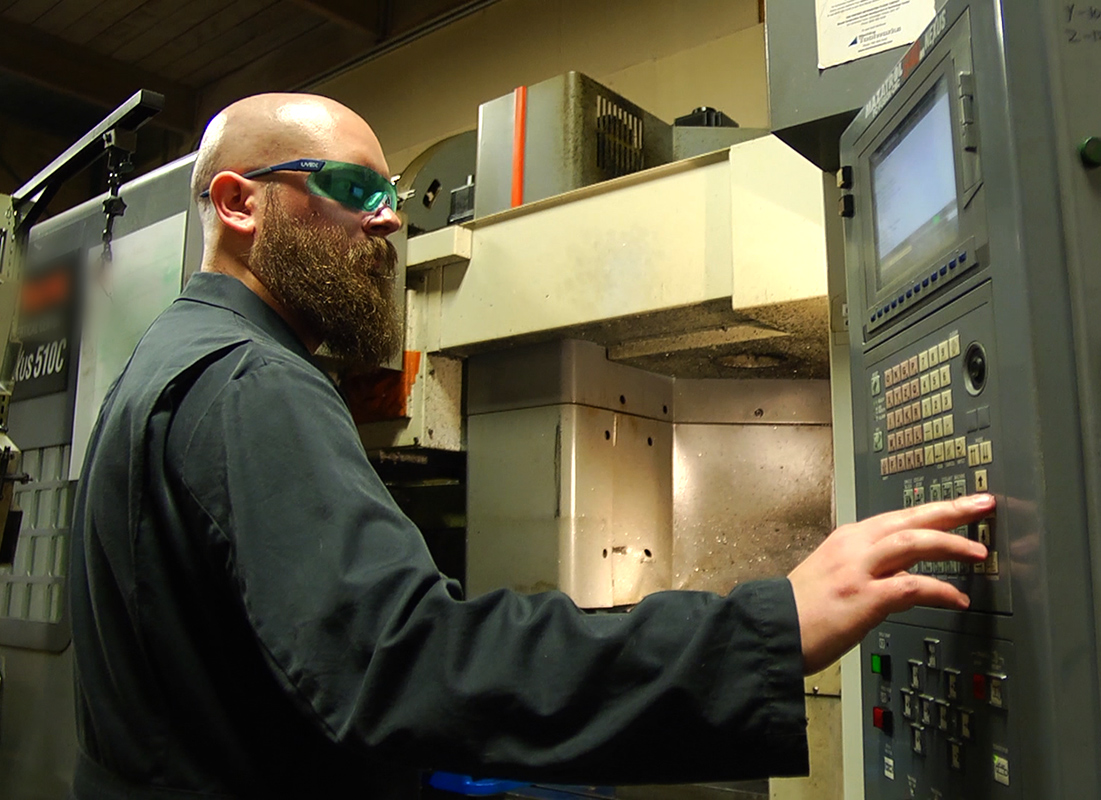 Machinist: Occupations in Alberta - alis
Does making things out of metal appeal to you? Are you skillful and mechanically inclined? Do you have good math skills and appreciate precision? Then you may want to re-tool your future as a machinist.
Choose a guide...

Machinists set up and operate precision metal cutting and grinding machines such as lathes, milling machines, drills and grinders to make and repair products made from metals, non-ferrous materials (materials that do not contain iron) and new alloys.

Interest in performing precision machining operations such as sawing, turning, milling, boring, planing, drilling, precision grinding and other operations, and in planning best sequence of operations

Machinists work according to very precise specifications. When there are no prints or other specifications, they determine dimensions by logic or by measuring samples using instruments such as micrometers and vernier calipers. Measuring instruments or machine tools can be controlled electronically and may require skills in programming and operating.

Shops often have a higher than normal noise level and can be dusty. The use of petroleum products and chemicals is common practice, so some cleaning of oily equipment is required.

Machinists often stand for long periods and may at times be rushed to complete a job. They work a 37.5- to 40-hour week, usually five weekdays, but may be required to work overtime in emergencies. Night or evening shifts are common in some shops.

Machinist work on CNC machines or sometimes on older, conventional machines. They may be required to lift and move heavy items. There is risk of injury when working with high-speed machinery and sharp metals and tools.

They should enjoy doing creative work with machinery that requires a high degree of skill and precision.

Machinists and machining and tooling inspectors

This chart shows which job skills are currently in highest demand for this occupational group. It was created using this occupation's 100 most recent Alberta job postings, collected between Sep 15, 2022 and Feb 02, 2023.

To work in Alberta, a machinist must be ONE of the following:

Applicants who have related training or work experience may be eligible for admission, credit, or certification. Credits may reduce the period of apprenticeship.

Machinist apprentices may take the interprovincial exam in the final period of their apprenticeship training to earn a Red Seal (certification recognized in most parts of Canada).

Machinists set up and operate precision metal cutting and grinding machines such as lathes, milling machines, drills and grinders to make and repair products made from metals, non-ferrous materials (materials that do not contain iron) and new alloys. For more information, see the Designated Trades Profile section of Alberta’s Tradesecrets website.

For information on what you need and other details, visit the certification profile Machinist.

Machinists are employed by companies that manufacture or repair equipment, such as large government organizations or repair and maintenance firms. They may work in either job shops or production shops.

Experienced machinists may advance to positions such as inspector, foreman, superintendent or CNC programmer. Some machinists start businesses of their own.

Machinists are part of the larger 2011 National Occupational Classification 7231: Machinists and machining and tooling inspectors. In Alberta, 78% of people employed in this classification work in the following industries:

In Alberta, the 7231: Machinists and machining and tooling inspectors occupational group is expected to have a below-average annual growth of 0.9% from 2019 to 2023. In addition to job openings created by employment turnover, 59 new positions are forecasted to be created within this occupational group each year.

Journeyperson machinists wage rates vary but generally range from $28 to $34 an hour plus benefits (2019 estimates). Apprentices earn at least 55% of the journeyperson wage rate in their place of employment in the first year, 65% in the second, 75% in the third and 85% in the fourth.

Machinists and machining and tooling inspectors