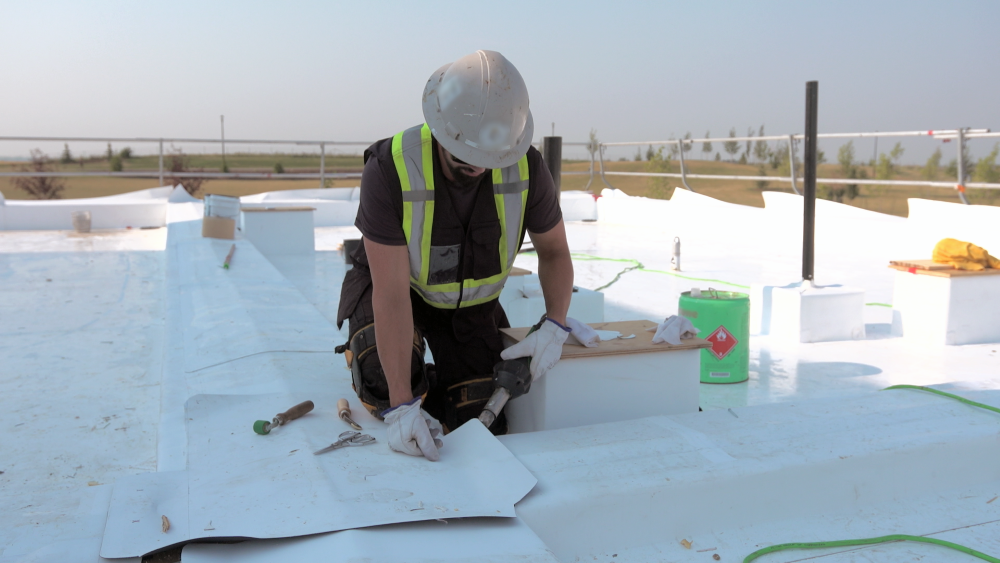 Roofer: Occupations in Alberta - alis
Do you like being on top of the world? Are you fit and sure on your feet? Is being outdoors your idea of a great workspace? Then a career as a roofer could have you coming out on top.
Choose a guide...

Roofers prepare and apply protective coverings to flat and sloped roof surfaces in accordance with construction plans and specifications.

Interest in copying information to apply waterproof coatings to concrete and other masonry surfaces above, and below, ground level

Interest in repairing roofing systems, and in installing, repairing and replacing shingles, shakes and other roofing tiles on sloped roofs

Most flat roofs can be covered by a:

On the flat roofs of commercial and industrial buildings under construction, roofers:

Roofers work outdoors on roofs of varying heights. When the weather is good and building activity is high, roofers may work a considerable amount of overtime. There is risk of injury from falls and from working with hazardous, hot materials.

Roofers may be required to lift items that weigh over 25 kilograms. The heat can be intense for those working with hot bitumen in the summer.

They should enjoy physical exercise and working with their hands.

This chart shows which job skills are currently in highest demand for this occupational group. It was created using this occupation's 100 most recent Alberta job postings, collected between Dec 28, 2022 and Jan 28, 2023.

To work in Alberta, a roofer must be ONE of the following:

To register with Alberta Apprenticeship and Industry Training, apprentices must find a suitable employer who is willing to hire and train an apprentice. Most employers prefer to hire high school graduates.

The term of apprenticeship is 4 years (four 12-month periods) that include a minimum of:

High school students can earn credits toward apprenticeship training and a high school diploma at the same time through the Registered Apprenticeship Program (RAP).

Applicants who have related training or work experience may be eligible for admission, credit, or certification. Credits may reduce the period of apprenticeship.

Roofer apprentices may take the interprovincial exam in the final period of their apprenticeship training to earn a Red Seal (certification recognized in most parts of Canada).

For information on what you need and other details, visit the certification profile Roofer.

Most roofers are employed by roofing contractors on construction or repair jobs. Some roofers are members of unions and work from union halls. With experience, there are opportunities for roofers in education and technical marketing, as well as inspection and supervisory roles. Roofers may also become self-employed.

This occupation is less sensitive to economic changes than some construction trades because there is steady demand for repair work even if construction is slow. Roof systems require replacement every 15 to 30 years depending on the system used.

Roofers are part of the larger 2011 National Occupational Classification 7291: Roofers and shinglers. In Alberta, 98% of people employed in this classification work in the Construction [pdf] industry.

In Alberta, the 7291: Roofers and shinglers occupational group is expected to have a below-average annual growth of 1.3% from 2019 to 2023. In addition to job openings created by employment turnover, 39 new positions are forecasted to be created within this occupational group each year.

Journeyperson roofers wage rates vary between $28 and $40 per hour, plus benefits (2019 estimates), depending on the location of the job and the type of roofing system being installed. Apprentices earn at least 65% of the journeyperson wage rate in the first year, 75% in the second, 85% in the third year, and 95% in the fourth.