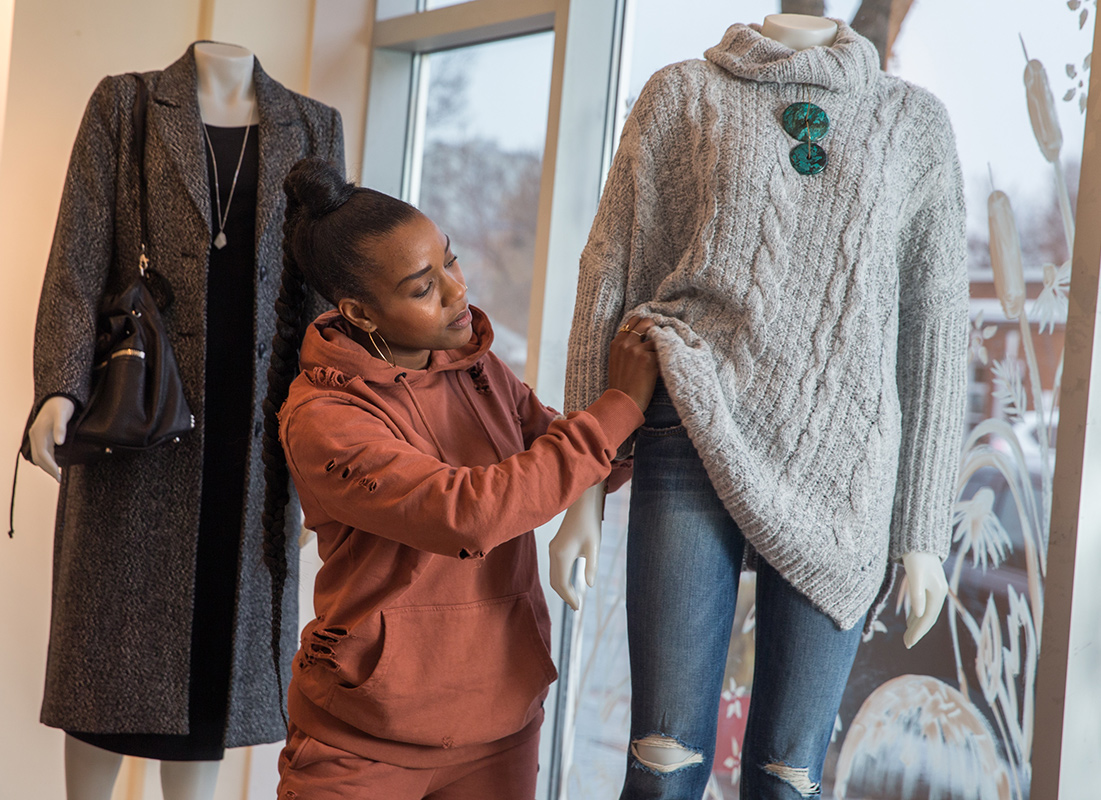 Visual Merchandiser: Occupations in Alberta - alis
Are you always up for a great shopping experience? Do you stay on top of fashion and trends? Are you imaginative and artistic? Then you may be displaying the skills you’ll need to be a visual merchandiser.
Choose a guide...

Visual merchandisers capture consumers’ attention through the placement of merchandise, signage, and interior displays in retail stores and shopping malls.

Interest in synthesizing information to develop new ideas and esthetic and practical solutions to meet customers' requirements; and in planning and developing permanent and temporary or moveable exhibits and displays for museum exhibitions, trade shows, conventions, retail spaces and for other exhibitions

Interest in precision working with drafting equipment and computer-aided design (CAD) software to prepare final designs; and in submitting designs to supervisors and clients for approval

Interest in speaking to direct workers who are erecting displays, making working drawings and models of displays, and positioning spotlights, coloured lighting and other illumination; and in evaluating information regarding developments in materials and styles

Most visual merchandisers work for large department stores and retail chains. Their responsibilities and position titles vary from one employer to another. In general, they:

Visual merchandisers must be aware of the store’s layout in intimate detail. Frequent shifts of large quantities of merchandise require merchandisers to solve problems and anticipate customers’ needs.

Some organizations have two levels of visual merchandising. One is responsible for the overall look and colour flow of displays. The other is in charge of maintaining window and other displays from day to day.

Displays usually are planned two to four weeks in advance to co-ordinate with special promotions and advertising campaigns. Large companies or chains most often provide signage and prop packages for merchandisers who work exclusively for them. Products may be specified for display and guidelines usually are tight. This ensures store presentations are uniform throughout the company.

Freelance merchandisers who work for smaller chains and independent stores may be able to work under less stringent guidelines. Some do everything from building props to producing signage with computers.

Visual merchandisers ensure stores present a strong corporate image that appeals to their target market. Due to constant changes in the retail and fashion market, they must work under tight deadlines. Peak times vary depending on the store’s target audience. For example, back-to-school time may be busy for a children’s store. A jewellery store may be busier at Valentine’s Day.

Some visual merchandisers travel from store to store, either as employees of retail chains or as freelancers.

They should enjoy synthesizing information to develop new ideas and find practical solutions to problems. They should like taking a methodical approach to precision tasks. They should be comfortable directing the work of others.

Visual merchandisers may acquire the knowledge and skills they need by:

Most employers prefer to hire applicants with related post-secondary education.

Art and design programs are offered by post-secondary schools throughout Alberta.

Most self-employed display designers establish themselves in the profession before trying to freelance.

Visual Merchandisers are part of the larger 2011 National Occupational Classification 5243: Theatre, Fashion, Exhibit and Other Creative Designers. In Alberta, 75% of people employed in this classification work in the following industries: