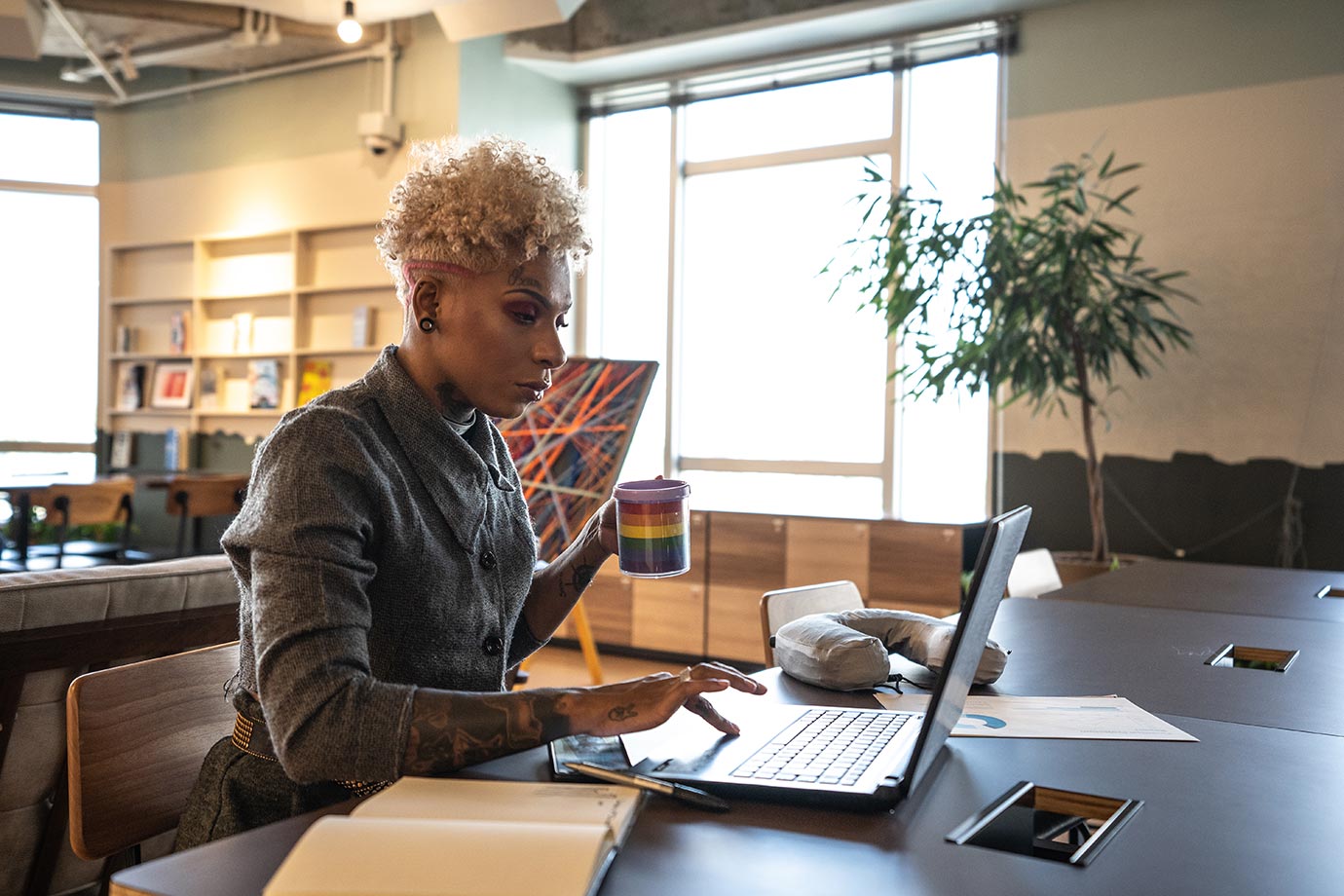 Important Context for Counselling Sexual and Gender Minorities - alis
Learn about terminology, history, legislation, and challenges relevant to clients in the LGBTQ2 community.
Choose a guide...

©
iStock.com/FG Trade
Inspire
and Motivate
What Works: Career-Counselling Strategies for Diverse Clients
A A

Sexual and gender minorities in Canada include lesbian women, gay men, and bisexual, transgender, queer, and Two-Spirit persons. The abbreviation LGBTQ2S+ is commonly used to refer to persons in these groups. Other similar acronyms are often used interchangeably and typically aren't meant to exclude individuals.

Support your LGBTQ2 clients with strategies and approaches that are welcoming, ethical, respectful, and practical.
©
iStock.com/A&J Fotos
Inspire and Motivate

Though Western societies are becoming more accepting of sexual and gender minorities, many factors continue to contribute to reduced employment outcomes in this population.

Counsellors must use terms that are accepted by the LGBTQ2S+ community as respectful and inclusive. Use of appropriate terms helps clients feel they are in a safe and welcoming environment. The Government of Canada’s LGBTQ2 Secretariat maintains a glossary of appropriate terminology, including the following.

Sexual orientation is the “sexual attraction for people of the same or another sex or gender.”

This is separate from questions of gender identity and includes:

Gender identity is a person’s “internal and deeply felt sense of being a man or woman, both or neither. A person’s gender identity may or may not align with the gender typically associated with their sex. It may change over the course of one’s lifetime.” Different gender identities include the following:

Transgender people have many issues in common with other sexual minorities, such as identity development, coming out, oppression, and discrimination. At the same time, they face unique challenges, such as the impact of sex change procedures, legal issues around their status as male or female, the impact of cross-dressing, and a variety of occupational choice and adjustment issues.

Other groups in the LGBTQ2S+ community

LGBTQ2S+ identities and self-definitions are continuously evolving. Some other groups of people in the community don’t directly align with either the sexual orientation or gender identity category.

The LGBTQ2S+ community refers to the emotional state of not being able to disclose their identity as the closet. It’s a dark, constricted, claustrophobic space that limits the person’s ability to grow and engage with society.

People who have not disclosed their identity to others are referred to as closeted or in the closet. Closeted people may hide their identity in the workplace, at school, at home, and with friends. People may be closeted in certain social contexts but not in others.

Coming out of the closet refers to the process of discovering one’s identity, integrating this knowledge into one’s personal life, and beginning to disclose that identity to others. Coming out is a complex, selective, and ongoing process.

Outing is the hostile act of publicly disclosing another person’s sexual orientation or gender identity without that person’s permission or knowledge. Not only is it considered very disrespectful, the experience of being outed can be deeply traumatic. In some cases, it can put the outed individual in serious danger of violence and abuse.

Homophobia is an umbrella term for the fear, hatred, or aversion experienced by members of the LGBTQ2S+ community as a result of their identity. It includes more targeted phobias such as biphobia or transphobia. It is often expressed by offensive, discriminatory, and violent actions, and its presence can have a strong psychological effect on the broader LGBTQ2S+ community. The Public Health Agency of Canada defines internalized homophobia as the “diminished sense of personal self-worth or esteem felt by an individual as a result of the experienced or presumed homophobia of others.”

Homophobia takes many forms and includes homonegativity, which refers to having negative views toward LGBTQ2S+ people without implying fear.

Heterosexism, cissexism, heteronormativity, and cisnormativity refer to world views in which all activities are seen from a majority heterosexual or cisgender point of view. Excluding references to people of other sexual orientations and gender identities disempowers minority populations and makes them feel invisible. Though rarely deliberate, these world views are typically considered hurtful and offensive to members the LGBTQ2S+ community.

Reclaimed language is taking terms or symbols that have been used in a derogatory fashion and using them in a positive way to describe one’s experiences or self. Queer is an example of a reclaimed term. The pink and black triangles, which were used by the Nazis to identify gay, lesbian, and political prisoners, are examples of reclaimed symbols.

Promotion of equality in law

“The promotion of equality entails the promotion of a society in which all are secure in the knowledge that they are recognized at law as human beings equally deserving of concern, respect, and consideration.”

The LGBTQ2S+ community has a long history of discrimination and marginalization. Before the 1969 Stonewall riots, the community was largely underground, trying to stay away from state-sponsored scrutiny, profiling, and criminalization. The riots, triggered by an undercover police raid on the Stonewall Inn, generally marks the start of a more outward-facing, activist sentiment in North America’s LGBTQ2S+ community.

This activism further crystallized during the 1980s and 1990s because of the HIV/AIDS epidemic, which, in North America, mostly affected gay and bisexual men. However, it wasn’t until the late 1990s that LGBTQ2S+ rights began to see legal protection in Canada.

Alberta’s previous Human Rights, Citizenship and Multiculturalism Act recognized that all persons are equal in dignity, rights, and responsibilities with regard to the protected grounds of race, religious beliefs, colour, gender, physical disability, mental disability, age, ancestry, place of origin, marital status, source of income, or family status. The Act did not include sexual orientation, gender identity, or gender expression as protected grounds. As of 1998, however, sexual orientation had been “read in” by the Supreme Court of Canada as a protected ground of discrimination in Alberta.

At this time, the renamed Act also updated the definition of marital status to read “the state of being married, single, widowed, divorced, separated or living with a person in a conjugal relationship outside marriage.” Before the change, the word “state” was “status,” and the word “person” was followed by “of the opposite sex.”

In 2015, the Act was updated again to include gender identity and gender expression as further protected grounds, distinct from sexual orientation.

Canadian Charter of Rights and Freedoms

The Canadian Charter of Rights and Freedoms states: “Every individual is equal before and under the law and has the right to the equal protection and equal benefit of the law without discrimination and, in particular, without discrimination based on race, national or ethnic origin, colour, religion, sex, age or mental or physical disability.”

In 1996, the federal government passed Bill C-33, adding sexual orientation to this list of prohibited grounds of discrimination under the Canadian Human Rights Act.

In 2017, Bill C-16 further expanded the list of prohibited grounds to include gender identity and gender expression, following the example set by various provinces, including Alberta.

Bill C-250 was passed in the House of Commons in 2004, amending Sections 318 and 319 (Hate Propaganda) of the Criminal Code of Canada to include sexual orientation in the listing of identifiable groups against which hate propaganda is deemed a criminal offense.

In 2017, those sections of the Code were amended further to include gender identity and gender expression.

For LGBTQ2S+ clients, the development of their sexual identity involves transitioning from a heteronormative or cisnormative system of cultural beliefs, values, attitudes, behaviours, and identification to those of a minority population with which they increasingly identify. To make that transition, they must manage or overcome externalized homophobia and heterosexism or cissexism as part of their positive self-identification as an LGBTQ2S+ person.

A place of acceptance

“It is important to let [LGBTQ2S+ clients] know right up front that [their sexual orientation or gender identity] is only one part, although an important part, of who they are and that this is a safe place to talk about it. Seeking help is hard enough for anybody and, in my experience, most people take a long and winding road before going to a counsellor... I don’t always know if I can help them, but I can listen and not judge.”

A number of models related to the formation of gender and sexual identity have been proposed. The social constructionist perspective identifies 6 stages of the process for forming sexual or gender identity:

Often when LGBTQ2S+ persons come out to their families and peers, temporary conflicts arise, leaving them with very little support. When this event coincides with the timing of important career decisions, it may influence their self-esteem, self-efficacy, and general well-being. This, in turn, negatively affects their career decision-making process.

Coming out is a continual and lifelong process that is always influenced by safety, vulnerability, individual comfort, and perceived levels of support and acceptance. Coming-out experiences are linked to a larger coming-to-terms process. This involves both the person who discloses a minority identity and the person who receives that disclosure. Researchers suggest that coming-out and coming-to-terms processes are critical to the mental health of all LGBTQ2S+ people.

Learn about the wide range of mental health disorders and the barriers and challenges that clients with these disorders may face.

As the most recent group to receive specific protection under human rights legislation, gender minorities continue to face the highest levels of stigma and misunderstanding in the workplace. Traditional, cisnormative workplace policies can limit how much this client group is able to align their gender expression with their gender identity in the workplace. As a result, this group faces significantly higher unemployment and lower median salaries than both the general public and their sexual minority counterparts.

Common cisnormative workplace policies include binary gender assumptions on workplace forms, gender-specific uniforms, and binary labelling on bathrooms and locker rooms. These policies, which are often already visible to transgender and non-binary clients during the work search and interview process, can result in this group feeling invisible and closeted before they even accept the job.

Gender transition also means that a person’s past work history and legal identity might be under a different name and pronouns than they currently use. Those who have not yet transitioned have to decide whether to do so in the context of their current employment. If they don’t feel supported, they may decide to seek a new job as part of their transition.

Certain methods of gender expression, such as binding one’s breasts or tucking one’s genitalia, may not be sustainable over the course of a full workday. If people do not feel safe expressing both their biological and chosen genders in the workplace, this can make certain jobs impossible. Meanwhile, medical gender-affirming procedures can be very costly, making any loss of employment income even more devastating.

For all these reasons, career success for individuals who identify as transgender or non-binary often comes in the form of working online, being self-employed, or founding companies where they can create safe environments for themselves. As more employers adapt to current human rights legislation, learn from gender minorities active in their industry, and work to create safer, more accommodating workplaces, these limitations will become less of a factor for gender minority clients.