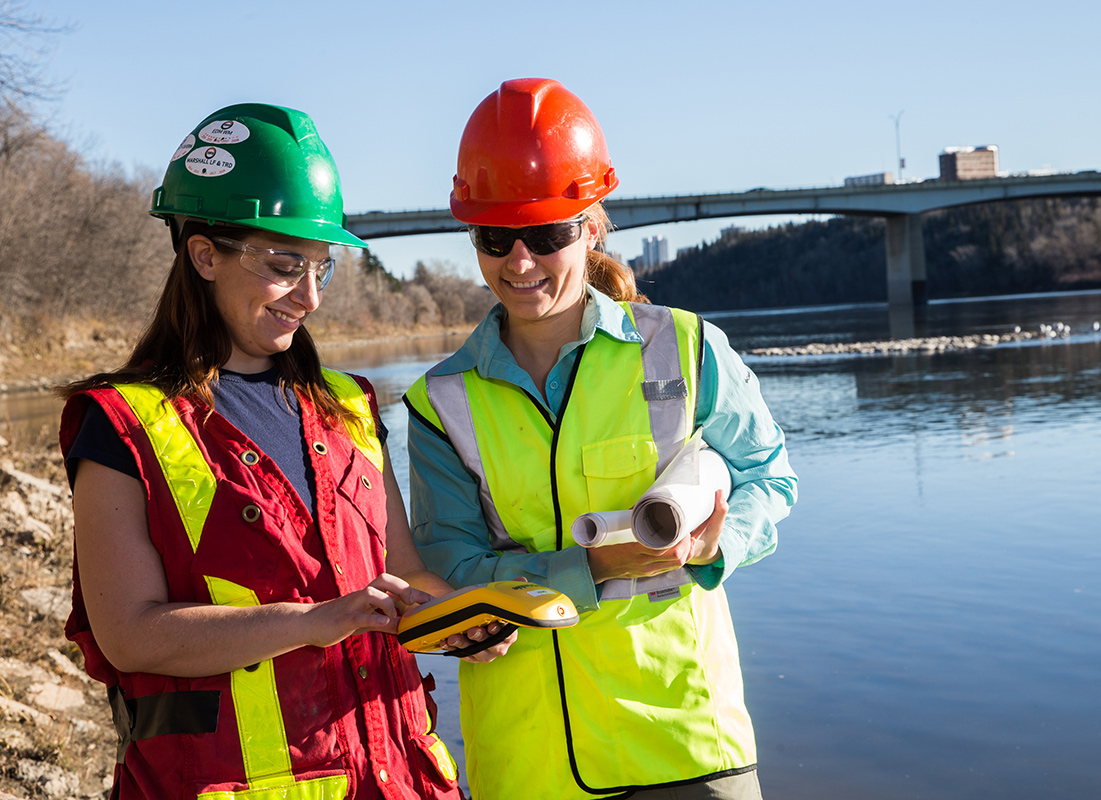 Geotechnical Engineer: Occupations in Alberta - alis
Are you interested in diverse infrastructure projects? Do you think of a major waterbody or a steep slope as a construction challenge? Are you interested in how things work from the ground below? Then you may want to explore a career as a geotechnical engineer.
Choose a guide...

In constructing our civilizations, we build on, with, from, or around soil, rock, other geo-materials, and groundwater. Geotechnical engineers assess and engineer the conditions needed for construction.

Interest in synthesizing information to conduct studies of ground-water flow and contamination; to develop guidelines for site selection, treatment and construction; to analyze and prepare recommendations for construction and improvement projects such as rock excavation, pressure grouting and hydraulic-channel erosion control; and to analyze and prepare reports on settlement of buildings, stability of slopes and fills, and probable effects of landslides, and earthquakes to support construction and civil engineering projects

Interest in precision working to design, develop and implement computer applications for geophysics, geochemistry, geology, mapping and related fields, and to plan, develop, co-ordinate and conduct studies in mining exploration, evaluation and feasibility

Interest in supervising technologists, technicians, and other engineers and scientists; and in providing recommendations on the suitability of locations for civil engineers, mining and oil and gas projects

Geotechnical engineers use their knowledge of soil and rock properties to evaluate risk and solve problems on infrastructure projects. These can include:

Geotechnical engineers work with geologists, scientists, and other engineers. They often specialize or take part in working groups in specific areas. They may be generalists within that area or specialize further. These areas can include:

Duties most often fall into 3 stages.

During literature review or desktop study, geotechnical engineers assess whether planned projects are feasible from an engineering point of view. They:

During site investigation or monitoring, they carry out “ground truthing” exercises to assess potential risks to humans and the environment. They:

During lab testing and reporting, they:

Geotechnical engineers may spend a large part of their working hours outdoors. This is most likely early in their careers.

They may work on projects in remote locations, which requires a lot of travel. Otherwise, they may have to travel less than half of their time.

They may have to carry heavy bags of soil. This is most likely early in their careers.

The basic educational requirement for geotechnical engineers is a 4-year bachelor’s degree. The degree must include courses in a related engineering discipline. This could be civil or geological engineering.

A graduate degree in this field is an asset. Along with several years of practice, it provides confidence in decision making.

Geotechnical engineers need to know how to use geotechnical software such as GeoStudio™, LPile, gINT®, and Settle 3D.

Certification is not required. However, it may be an asset when seeking employment.

Geotechnical engineers may work for or contract out to:

Success in this career requires practical knowledge and good engineering judgment. Engineering judgment comes mostly from experience and mentorship. New engineers can gain these through co-op, internship, or practicum programs, or part- or full-time employment.

Landing a job may be hard without related experience. Some companies provide internship and practicum programs to new graduates. These are also open to international professionals with no North American experience. This builds resumés to enter the job market or obtain professional engineer certification.

They may also move into management. Working with experts in many different fields may help them develop management skills. They may move into positions in:

In the 2144: Geological engineers occupational group, 89.6% of people work in:

In Alberta, the 2144: Geological engineers occupational group is expected to have a below-average annual growth of 0% from 2019 to 2023. In addition to job openings created by employment turnover, 0 new positions are forecasted to be created within this occupational group each year.

Earnings vary depending on factors such as: