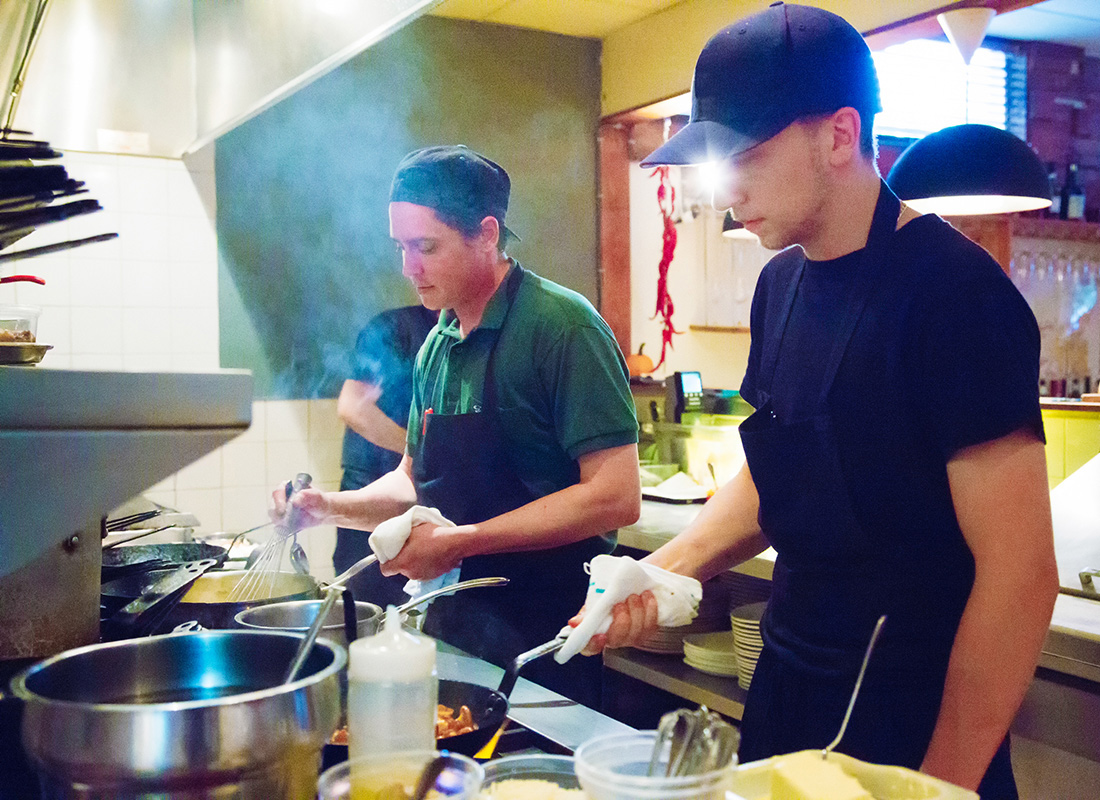 Kitchen Helper and Food Assembler: Occupations in Alberta - alis
Do you enjoy keeping a tidy kitchen and preparing meals? Does working on a team appeal to you? Are you in good health? Then you may want to dish up a career as a kitchen helper and food assembler.
Choose a guide...

Create New Guide What is an alis guide?
Close
Occupations in Alberta
©
iStockphoto/NicolasMcComber

Kitchen helpers and assemblers assist cooks in restaurants and institutions by keeping the kitchens clean and by performing a variety of food preparation tasks.

Interest in handling to remove trash and clear kitchen garbage containers, and to unpack and store supplies in refrigerators, cupboards and other storage areas

Interest in comparing to wash and peel vegetables and fruit, clean work tables, cupboards and appliances, and sweep and mop floors

Kitchen helpers keep the kitchens in food service establishments clean and tidy. In general, they:

In some establishments, kitchen helpers also:

Food preparers prepare or cook partially prepared foods in restaurants. In general, they:

Sandwich, salad and dessert makers prepare salads, sandwiches and desserts in commercial eating establishments and institutions such as hospitals. In general, they:

Kitchen helpers and food assemblers work shifts and often work weekends and holidays. They are on their feet most of their shift and may have to carry trays of food dishes and glassware weighing up to 20 kilograms. They may be exposed to:

Kitchen helpers and food assemblers sometimes work under time pressures and must be careful to avoid cuts from sharp utensils and burns from hot appliances. They usually take their breaks between peak serving times.

They should enjoy handling food and equipment, having clear rules and methods for their work, and working with people.

This chart shows which job skills are currently in highest demand for this occupational group. It was created using this occupation's 100 most recent Alberta job postings, collected on Feb 02, 2023.

There are no minimum education requirements for kitchen helpers and food assemblers. However, food safety training is a definite asset when looking for employment, and related education is generally required for advancement.

In Alberta, food safety courses are offered by:

Visit the Government of Alberta website or contact 780-427-7164 for a listing of approved food safety training options.

The Government of Alberta awards a Food Sanitation and Hygiene Certification to those who complete approved training and achieve at least 70% on a provincial exam. Food facilities generally employ at least 1 person who is certified. Where 6 or more people are working on site, at least 1 person present must be certified. Where fewer people are working on site, the certified person may be absent.

Food preparation is taught in some high school Career and Technology Studies courses and there is a formal apprenticeship program for cooks. In addition, post-secondary programs are designed to help people enter and progress in the field of food preparation.

However, Tourism HR Canada (formerly the Canadian Tourism Human Resource Council or CHHRC) offers voluntary certifications related to food services that are recognized across Canada. Certification training is accessible from the emerit website.

Kitchen helpers and food assemblers work in all types of restaurants from quick service (fast food) outlets and base camps to formal dining rooms. They also work in public institutions such as hospitals and nursing homes. Part-time work is common.

Experienced kitchen helpers and food assemblers may advance to assistant cook and cook positions (for more information, see the Food Service Helper or Cook occupational profiles), or to supervisory positions. However, supervisory positions may be limited in number, and advancement is generally easier and faster for those who have a high school diploma and are willing to take further education.

In Alberta, the 6711: Food counter attendants, kitchen helpers and related support occupations occupational group is expected to have an above-average annual growth of 2.3% from 2019 to 2023. In addition to job openings created by employment turnover, 1070 new positions are forecasted to be created within this occupational group each year.

Kitchen helpers and food assemblers often are paid just above minimum wage. (As of June 26, 2019, the minimum wage in Alberta is $15.00 per hour for most workers. For more information, see Minimum Wage.) Salaries are generally highest in hospitals and nursing homes but advancement prospects are limited (for more information, see the Food Service Supervisor occupational profile).