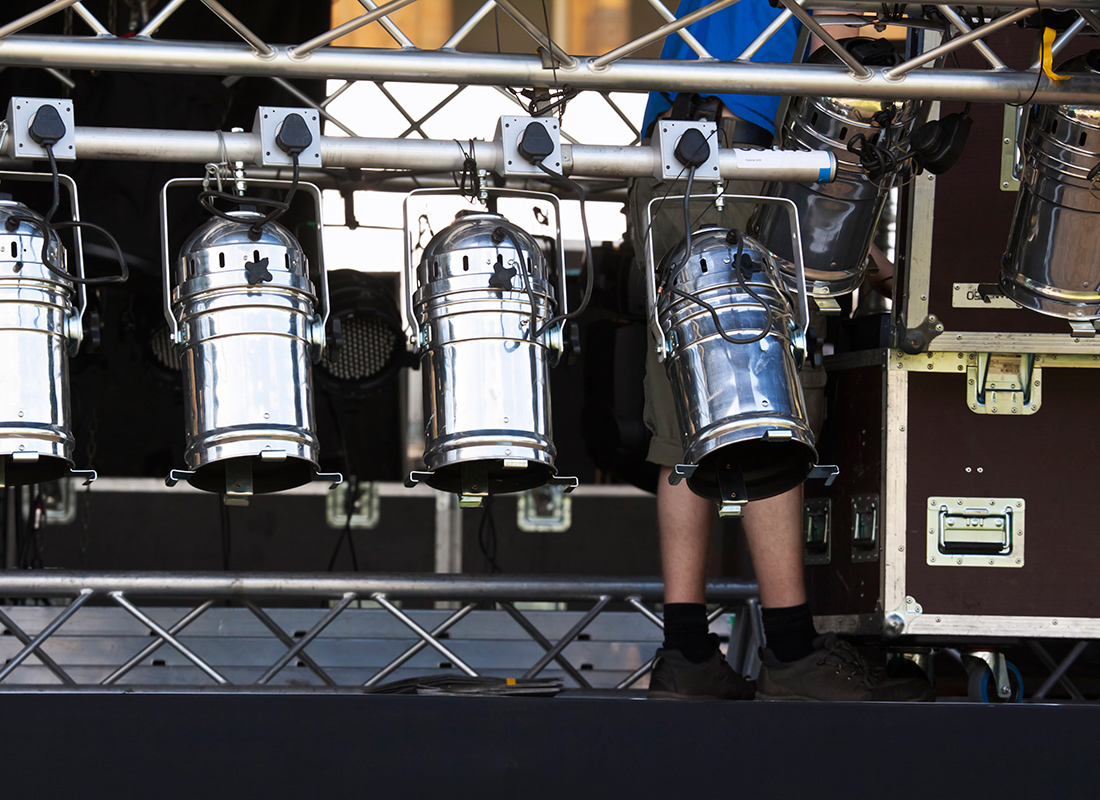 Lighting Technician: Occupations in Alberta - alis
Do you enjoy theatrical shows? Do you like working with electrical equipment? Can you work at heights? Then you may light up in a career as a lighting technician.
Choose a guide...

Create New Guide What is an alis guide?
Close
Occupations in Alberta
©
iStockphoto/stocknshares

Interest in precision working to position, set up and operate various lighting equipment to illuminate sets, studios and scenes, and to select and position equipment, manually or using a hoist

Interest in varying intensity of light using a wide range of techniques, and in repairing lighting equipment

In smaller organizations with no lighting director or designer, lighting technicians also may:

Working conditions vary a great deal from one job to another. For example, working on a film or theatrical production in a converted barn or outdoors is very different from working in a television studio. In general, however, lighting technicians spend a lot of time on their feet and the pace of work can become hectic. Last-minute changes or fixes are required often. Safety precautions must be observed at all times, particularly when handling hot lamps, climbing ladders or scaffolding, going up lifts, working at heights and handling electrical cables and equipment.

They should enjoy working with tools and electric and electronic equipment on tasks requiring precision. They also should enjoy having clear guidelines for their work and finding innovative ways to do things.

Lighting technicians need a basic understanding of electricity, colour theory, lighting equipment, light modifiers, and dimmers and control desks. They also must be able to apply their knowledge in a variety of situations. Some knowledge of electronics is an asset.

The International Alliance of Theatrical Stage Employees (IATSE) Local 212 in Calgary offers courses for motion picture and theatre lighting crews. Some courses are designed for ongoing updating of skills. Other courses must be completed in order to be hired to work on certain productions.

In addition, lighting technicians may need to complete training courses provided by manufacturers of lighting equipment used during production.

Some employers may require completion of accident prevention or response training such as fall arrest and first aid.

In the past, many lighting technicians learned on the job. However, the field is becoming more and more technical and competition for positions is keen. Most employers prefer to hire people who have related education or experience. Creative talent and training is a definite asset for lighting technicians who want to advance in the field.

Lighting technicians need to keep up with changes in technology.

Lighting technicians working as generator operators or set wiremen are subject to regulations for electricians.

Lighting technicians are employed by:

In motion picture and theatre lighting, employment may be seasonal or short term. Even experienced workers may experience periods of unemployment. Some worksites may require union membership to participate.

Experienced lighting technicians in large organizations may advance to supervisory positions, such as head electrician, lighting director or gaffer. Further advancement generally requires further education, which may be acquired through specialized workshops and seminars. Because this field is so specialized, advancing from technician to the position of lighting designer needs related post-secondary education. A bachelor’s degree or master’s degree in fine art with a specialization in theatre design is recommended.

Lighting technicians are part of the larger 2011 National Occupational Classification 5226: Other technical and co-ordinating occupations in motion pictures, broadcasting and the performing arts. In Alberta, 90% of people employed in this classification work in the following industries:

Rates of pay for lighting technicians vary depending on the nature of the work, the location, and the skills and reputation of the worker.