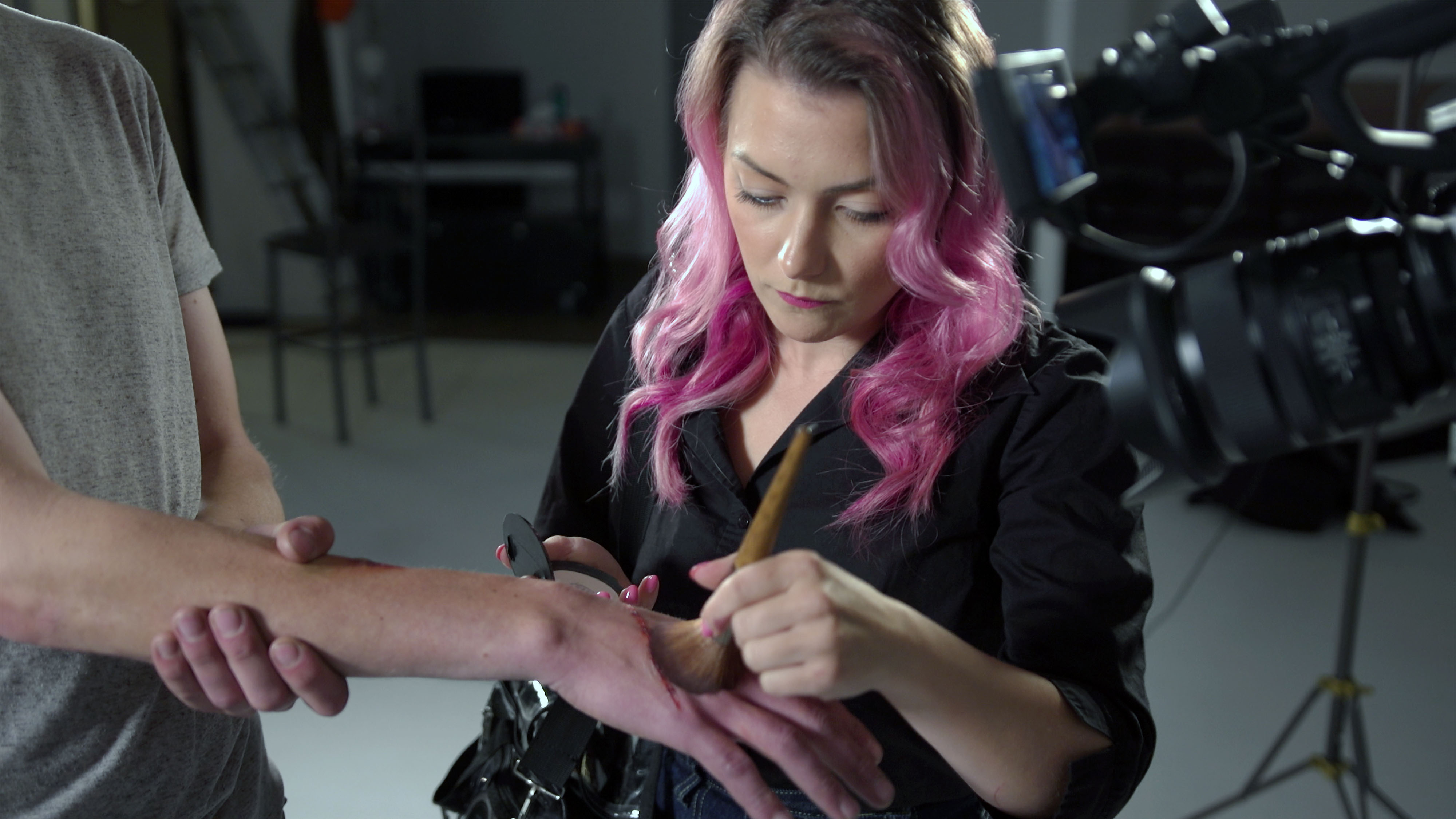 Makeup Artist: Occupations in Alberta - alis
Does transforming someone’s looks using makeup sound exciting? Are you artistic? Do you enjoy theatre, movies, or fashion? Then why not brush up on becoming a makeup artist?
Choose a guide...

Interest in precision working to manipulate brushes and other devices used for the care of skin, and to apply cosmetic and special effects make-up on actors and other performers

Interest in compiling information from period files to obtain images of characters to be depicted; and in requisitioning cosmetics and make-up materials

Interest in applying prostheses, cosmetics and make-up to change physical characteristics such as facial features, skin texture, body contours and dimensions, and in producing effects appropriate to characters and situations

Makeup artists work with news broadcasters and actors in television, advertising, photography, motion picture, stage, fashion and theatre productions. In general, they assess performers’ skin to ensure that makeup will not cause breakouts or skin irritations, and use makeup to:

For each television, film or stage production, makeup artists analyze the script, noting events that affect each character’s appearance, such as time period changes, weather elements, sickness and injuries. They meet with producers, directors and production designers to discuss the desired look for all characters, integrate their ideas with the performer’s wishes and plan the makeup for each scene.

When prosthetics (such as latex wounds or fake facial features) are applied onto a performer, makeup artists apply products to cover and blend the fake surfaces into the surrounding skin areas, so they appear seamless and natural. Makeup artists may need to apply or style and blend hair applications (such as bald caps or wigs) as well. After a performance is completed, these prosthetic pieces are removed carefully by the makeup artist, in order to be reused later.

Makeup artists must duplicate their work precisely time after time. For example, because film or television scenes often are shot out of order, they might have to reproduce a bruise months after creating it the first time for the filming of a subsequent scene.

They spend considerable time and energy researching, testing and experimenting to create makeups and special effects for time periods and for science fiction and horror characters.

Makeup artists may stand for many hours at their work. In filmmaking, a typical working day is 12 hours long, but much of the time is spent watching and waiting, with touch-ups required between takes. Extensive special effects makeup can take hours to apply, so makeup artists may begin their workday long before the rest of the cast or crew.

Makeup artists work under pressure to finish their work in a set timeframe. Fashion shows or photo shoots require quick work to stay on schedule. They may be required to travel to fairly remote location shoots for television or film, and work in all kinds of weather and terrain. The bags they carry to work sites may weigh up to 10 kilograms. Lifting requirements are considerably more for artists who also must carry items such as stools and lighting equipment.

They should enjoy performing precision tasks, compiling information about character requirements and developing innovative approaches to their work.

Makeup artists also must be able to market their services and negotiate contracts.

There is no minimum education requirement in this occupation. However, successful completion of a Workplace Hazardous Materials Information System (WHMIS) course and a Set Etiquette course is required to work on International Alliance of Theatrical Stage Employees (IATSE) project. Some unions require members to have a high school diploma or equivalent. A background in theatre, film, television or visual arts is a definite asset.

Prospective makeup artists gain experience working under the supervision of recognized makeup artists. They also may acquire the skills and knowledge they need by taking related courses offered:

Prospective makeup artists are advised to discuss their education options with program graduates and other makeup artists before enrolling in an education program. A background in theatre, photography, film, television or visual arts is a definite asset.

Some theatre and television studios only hire International Alliance of Theatrical Stage Employees (IATSE) members and require makeup artists to have insurance.

Makeup artists usually work on a contract basis for:

Makeup artists must supply their own equipment and makeup supplies. A good basic makeup kit costs about $1,000.00. Top makeup artists in Alberta may have $8,000.00-$50,000.00 worth of equipment and supplies, much of which must be replenished often. Larger film and television projects often pay a kit rental fee.

Most work opportunities are located in large urban centres. Until makeup artists establish contacts and build a reputation in the industry, they may do other types of work, such as:

The entertainment industry is limited and employers generally prefer to hire makeup artists they have worked with before. Therefore, even the most successful makeup artists in Alberta may do other types of work.

In the 5226: Other technical and co-ordinating occupations in motion pictures, broadcasting and the performing arts occupational group, 75.3% of people work in:

Fees depend on the nature of the contract and the reputation of the artist. In film and television, minimum rates are set by the IATSE collective agreement.

There are slow months of work as well as busy ones, so makeup artists may need to supplement their incomes at times with other part-time jobs.