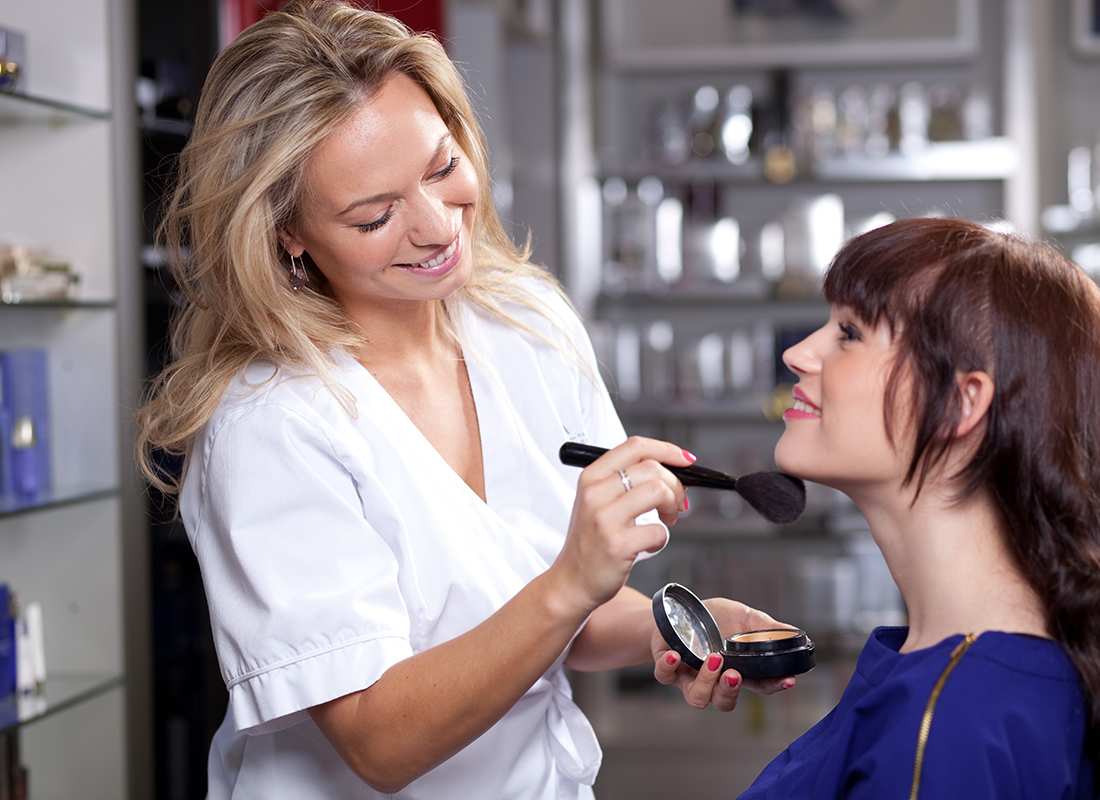 Cosmetician: Occupations in Alberta - alis
Do you follow trends in fashion, skin care and makeup? Do you like to show people how to use products? Then becoming a cosmetician may be the foundation for your career.
Choose a guide...

Cosmeticians demonstrate and sell cosmetic and skin care products and advise customers about their use.

Interest in manipulating various products and using make-up application techniques; may specialize in applying make-up on models or other individuals for special occasions

Depending on where they work, cosmeticians may also help with ordering and . For more information see the Visual Merchandiser occupational profile.

Cosmeticians work in retail settings. They may work alone or as part of a team. They may work weekends and evenings. They spend most of their shifts on their feet. They may sometimes deal with difficult clients.

This chart shows which job skills are currently in highest demand for this occupational group. It was created using this occupation's 100 most recent Alberta job postings, collected between May 11, 2022 and Jun 24, 2022.

There are no standard education requirements for cosmeticians. But a high school diploma and related training are assets.

Most cosmeticians are trained on the job. Some have related post-secondary training. Many cosmeticians go to training seminars, which are run by the companies that make the products they sell.

Cosmeticians working in fast-growing retail companies must be skilled in all areas of beauty including skin, hair, and fragrance.

The Canadian Cosmetics Careers Association offers a cosmetics correspondence course, which some employers require. It also offers an accreditation program for cosmeticians.

People interested in this occupation should talk to practising cosmeticians and potential employers about training and work options.

Cosmeticians work in the cosmetics departments of retail stores, pharmacies and other retail beauty shops.

Experienced cosmeticians may advance to supervisory positions in cosmetics departments. Some work as sales representatives for cosmetics companies. With further training, cosmeticians may move into related occupations such as esthetician and makeup artist.

Over 4,900 Albertans are employed in the Estheticians, electrologists and related occupations occupational group. This group is expected to have an above-average annual growth of 2.0% from 2016 to 2020. As a result, 98 new positions are forecast to be created each year, in addition to job openings created by employment turnover. Note: As cosmeticians form only a part of this larger occupational group, only some of these newly created positions will be for cosmeticians.

In Alberta, the 6562: Estheticians, electrologists and related occupations occupational group is expected to have an above-average annual growth of 2.3% from 2019 to 2023. In addition to job openings created by employment turnover, 134 new positions are forecasted to be created within this occupational group each year.

Cosmeticians generally earn an hourly wage or a salary plus commissions.

Other Services (Repair, Personal Services and Related)
ALL INDUSTRIES