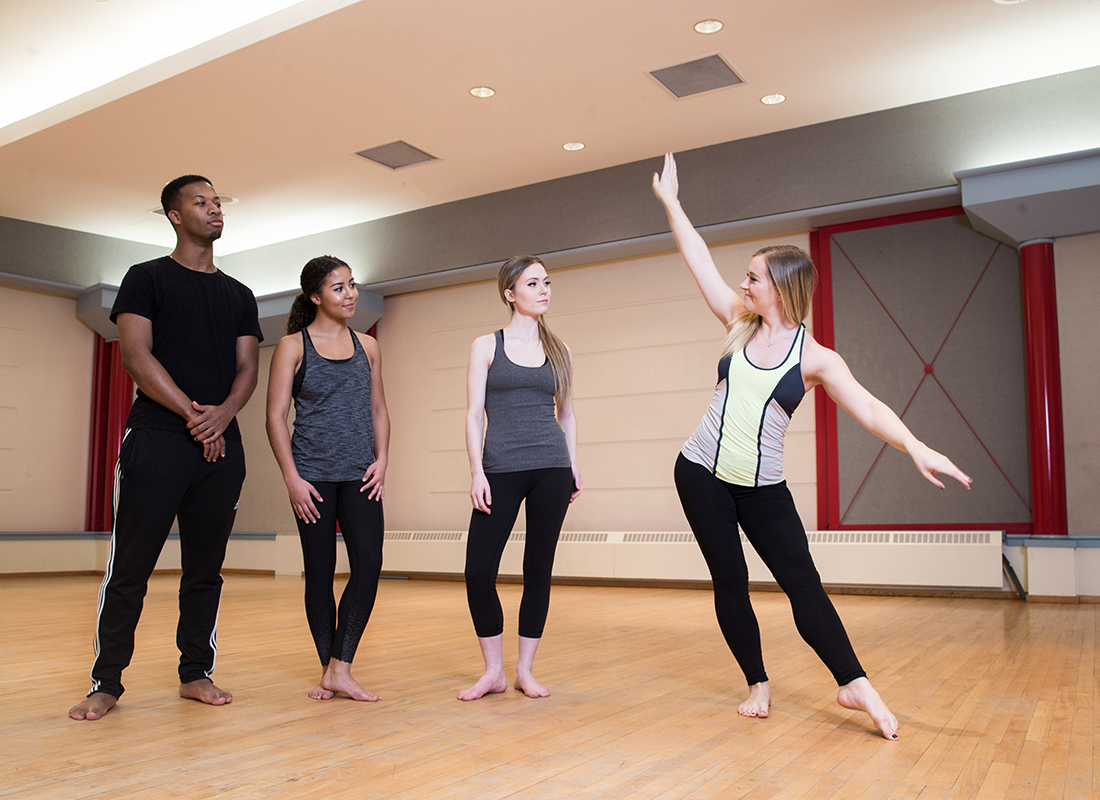 Choreographer: Occupations in Alberta - alis
Do you like expressing yourself through dance? Are you creative and do you enjoy teaching? Then you may want to see if a career as a choreographer gets you dancing.
Choose a guide...

Choreographers express ideas through dance. They design dances for professional or untrained dancers.

Interest in synthesizing information to create dances that convey stories, ideas and moods and harmonize with musical scores

Interest in instructing dancers in their performances and artistic interpretations, and by demonstrating movements required to convey themes

Choreographers translate stories, ideas, and moods into movements for performance by professional dancers or to provide physical activity for untrained individuals. This may involve:

To communicate creatively through the human form, choreographers must consider the limits to which dancers can push their bodies. At the same time, they must build a safe and trusting environment for creative risk-taking.

Choreographers may use recording equipment or choreographic methods to record dance movements and patterns.

In small dance companies, choreographers may have additional artistic or managerial responsibilities. For example, they may:

Freelance choreographers must also be able to promote and market themselves to find work.

Choreographers work long hours, including weekends and holidays. They may work on more than one show at a time. Rehearsals are particularly busy times, when choreographers must work with artistic directors, theatre designers, and technical crews. Rehearsals may take place during the day or in the evening to accommodate dancers who work at other jobs. Performances are usually in the evening.

Teaching and other contract work may add significantly to a choreographer’s daily working hours.

There may be a lot of travel, which may include overseas travel. The likelihood of travel increases with success, as popular shows often tour nationally or internationally.

They should enjoy creating innovative dances, taking charge of situations, and teaching others.

Most choreographers come from a dance background and specialize in one style of dance. However, they are often trained in various styles, from classical ballet to modern dance. They may draw on these traditions in their interpretive creations. It is helpful for choreographers to understand:

A background in production design and the ability to read music are definite assets.

Most dance companies provide opportunities for experienced dancers to learn by working under the direction of skilled choreographers. Classes in choreography are part of most dance programs.

Professional choreographers often work part time in their profession while also working in related occupations such as dancer, dance teacher, or movement coach. Some are the artistic directors of their own dance companies or run their own dance schools.

Choreographers may also be hired by organizers of events such as:

Opera and theatre companies may hire choreographers to train actors in dance movements or to design dance sequences.

Many choreographers progress into teaching in either the private or the public sector. Other career options include working as dancers, actors, or directors, or becoming managers in the film, TV, or theatre industries. Some find work as movement coaches (dramaturgy) for actors.

In the 5131: Producers, directors, choreographers and related occupations occupational group, 76.8% of people work in:

Earnings for choreographers vary depending on factors such as:

Choreographers may receive royalties every time one of their choreographed pieces is performed, or they may charge one-time fees to choreograph works for special events.

Updated Mar 17, 2021. The information contained in this profile is current as of the dates shown. Salary, employment outlook, and educational program information may change without notice. It is advised that you confirm this information before making any career decisions.