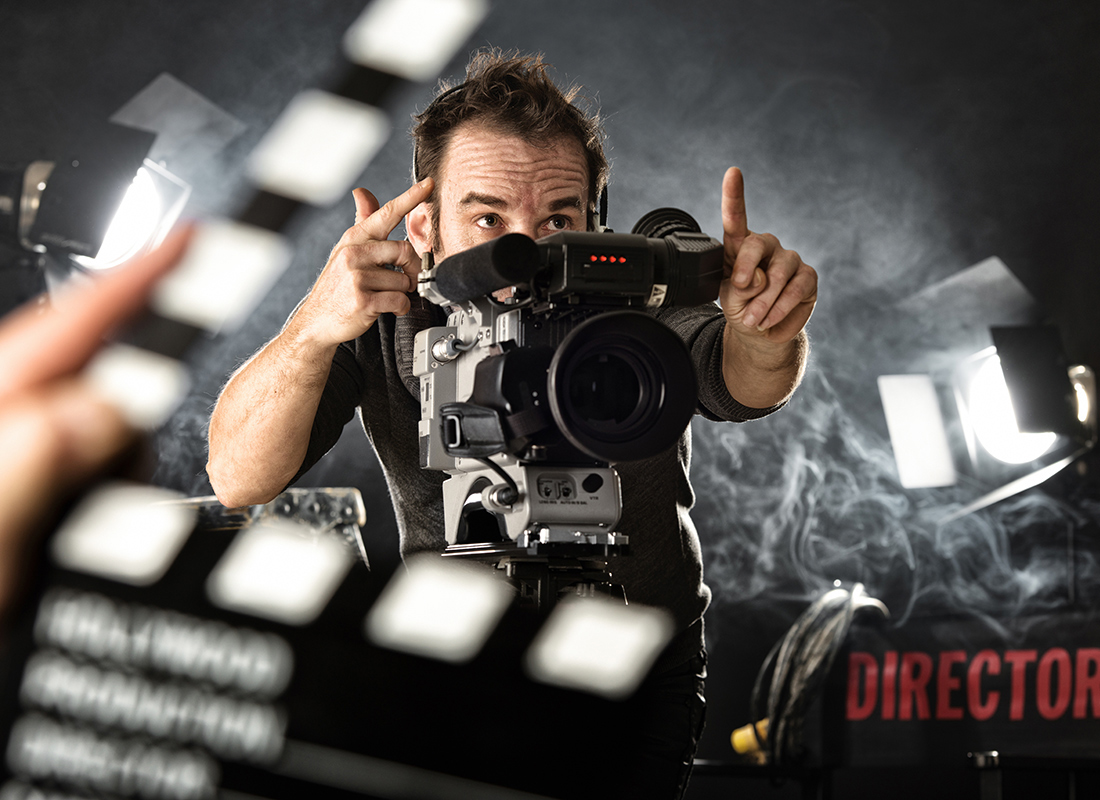 Film Director: Occupations in Alberta - alis
Are you passionate about movies? Are you artistic? Do you like to co-ordinate and direct the work of others? Then your passion may lead to a career as a film director.
Choose a guide...

Film directors develop an artistic vision for a film production and work with others to implement that vision.

Documentary directors work with a relatively small crew on location. In small budget films, they may write and produce the film as well as direct it. They likely work with a crew of 2 people: a camera operator and a sound engineer.

Dramatic directors work with actors to get the best performance from them. Before production begins, they:

During production, dramatic directors work closely with actors and crew members. For each shot, film directors communicate the approach they want for the scene, comment on characterization, explain the blocking and perhaps run through the scene once or twice before shooting the first take.

At the end of each day, directors and producers view the rushes (the day’s work on the film) to check the work in progress and make changes in future shoots. Because dramatic films are shot out of sequence, directors must visualize the "through line" of the story and judge whether the work is on track.

After filming finishes, directors may work with producers, film editors, composers and sound editors as the film is edited and the soundtrack added. On feature films, directors may help promote films before they are released. This may involve touring major cities and participating in media interviews, talk shows and other public appearances.

Hours of work for film directors often are long and irregular. They may work indoors or outdoors in all kinds of weather. Dealing with time pressures, budgets and creative aspects of the job can be stressful.

They should enjoy being innovative, coordinating the work of others, and dealing with people.

There are no standard education requirements for film directors, but most have related post-secondary education and experience. Many are experienced actors, editors or writers. Sometimes, they wrote the film they are directing. For information about related education options, see the Actor and Creative Writer occupational profiles.

Film directors need a good understanding of visual storytelling, photography and lighting as they relate to filmmaking. Formal training in filmmaking also should include theory, history and hands-on experience in production.

During the summer months, Banff Centre for the Arts and Creativity offers a variety of courses, workshops and residencies designed for people who have some related education or experience. The National Screen Institute also offers training opportunities and workshops for individuals with professional experience in film direction, production or writing. The Film and Video Arts Society of Alberta (FAVA) and Calgary Society of Independent Filmmakers (CSIF) periodically offer courses in film and video directing.

Film directors generally are hired on a contract basis to direct:

The film industry is highly competitive. Films are expensive to make so producers rarely hire inexperienced directors. Aspiring directors usually need years of related experience before being given full responsibility to direct a film. To gain experience and build their reputations, they may apply for arts grants. They use these to produce their own projects, which they then enter in film festivals. Organizations such as the Calgary Society of Independent Filmmakers (CSIF) and EMMEDIA Gallery and Production Society may help provide equipment and training for aspiring filmmakers.

Film directors are part of the larger 2011 National Occupational Classification 5131: Producers, directors, choreographers and related occupations. In Alberta, 89% of people employed in this classification work in the Information, Culture and Recreation [pdf] industry.

Film directors’ incomes vary considerably from one director to another and from one year to another depending on the director’s reputation and the economy. Some film directors work at other jobs and finance their own projects. Directors who work on a contract basis negotiate their fees before production begins. In some cases, Directors’ Guild of Canada (DGC) guidelines may apply.