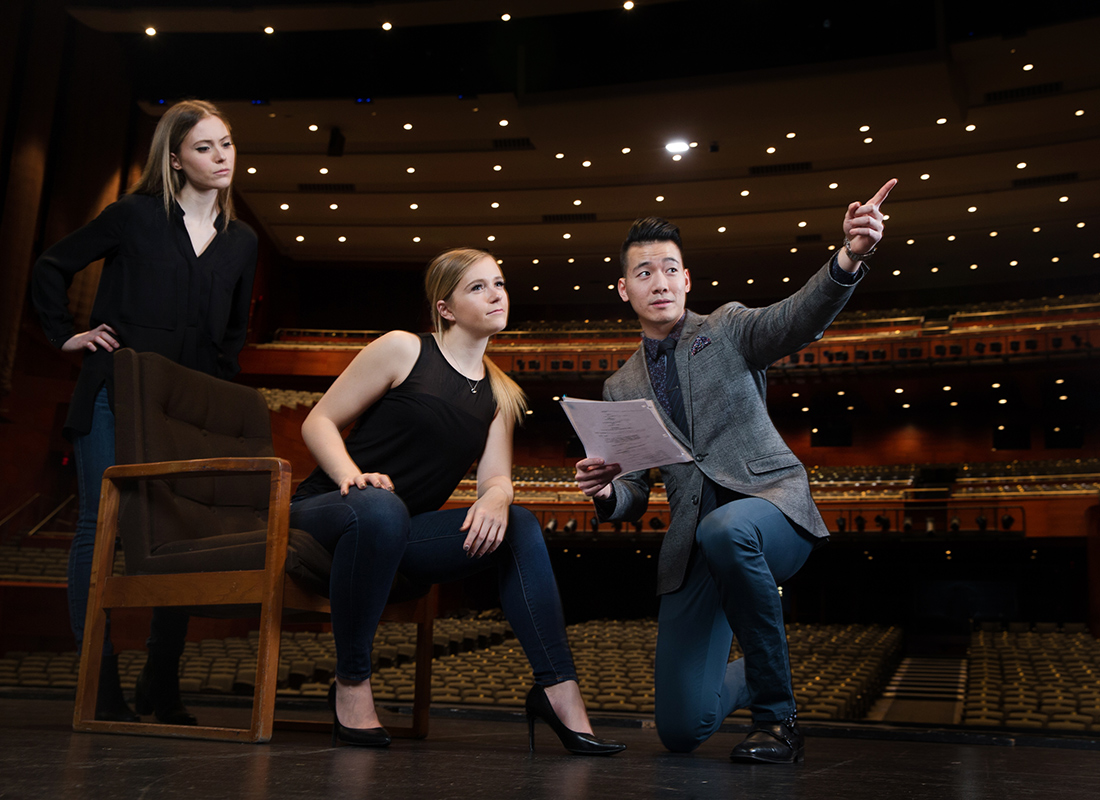 Theatre Director: Occupations in Alberta - alis
Do you love everything about theatre? Can you take risks and meet deadlines? Are you a great leader and communicator? Then you may want to raise the curtain on a career as a theatre director.
Choose a guide...

Theatre directors make artistic decisions about stage productions and consult with producers about everything from selecting the story or idea, the cast and sometimes the crew to overseeing rehearsals.​

Theatre directors may work in many areas, styles and genres of theatre or specialize in 1 or 2. For example, they may specialize in new works, mainstream theatre, collective theatre, musical theatre, popular theatre, theatre for young audiences, movement theatre, issues-based theatre, women’s theatre or improvisational theatre. Directors may choose scripts themselves or work with scripts chosen by the people who have hired them.

Theatre directors work collaboratively with set, lighting, costume and sound designers, choreographers, special effects technicians and others. Their responsibilities vary from one production to another but, in pre-production, directors generally:

With new works, theatre directors also may consult with playwrights about changes to the script, or workshop a script by rehearsing it with the playwright and actors to create a final rehearsal draft of the play.

Often a play has 1 or more dress rehearsals with an audience before opening night. This gives directors a last chance to make changes. When a play opens, the director’s job usually is complete. However, in small theatre companies, directors may introduce the play and meet with the audience after the show to discuss play interpretation.

Theatre directors usually rehearse a play for 2 to 4 weeks before the first public performance. During this time, they often work a 6-day week of 8-hour days, although the last few days before opening night may be longer.

Rehearsals generally are conducted in theatres, which may range in size and style from basement rooms to concert halls.

They should enjoy being innovative, co-ordinating the work of others, and dealing with people.

In talent-based occupations such as directing, related education does not guarantee success but can be a definite asset. Many theatre directors are experienced actors or writers. (Sometimes, they wrote the play they are directing.) Some are former stage managers.

Theatre directors need 5 to 10 years of related experience as well as related education. Prospective directors should obtain hands-on experience in as many areas of theatre production as possible and make as many contacts as possible in their field.

Theatre directors are part of the larger 2011 National Occupational Classification 5131: Producers, directors, choreographers and related occupations. In Alberta, 89% of people employed in this classification work in the Information, Culture and Recreation [pdf] industry.

Salaries for theatre directors are dependent on experience and reputation. Directors who work on a contract basis negotiate their fees before production begins. In some cases, theatre directors’ salaries fall under an agreement set by the Canadian Actors’ Equity Association.