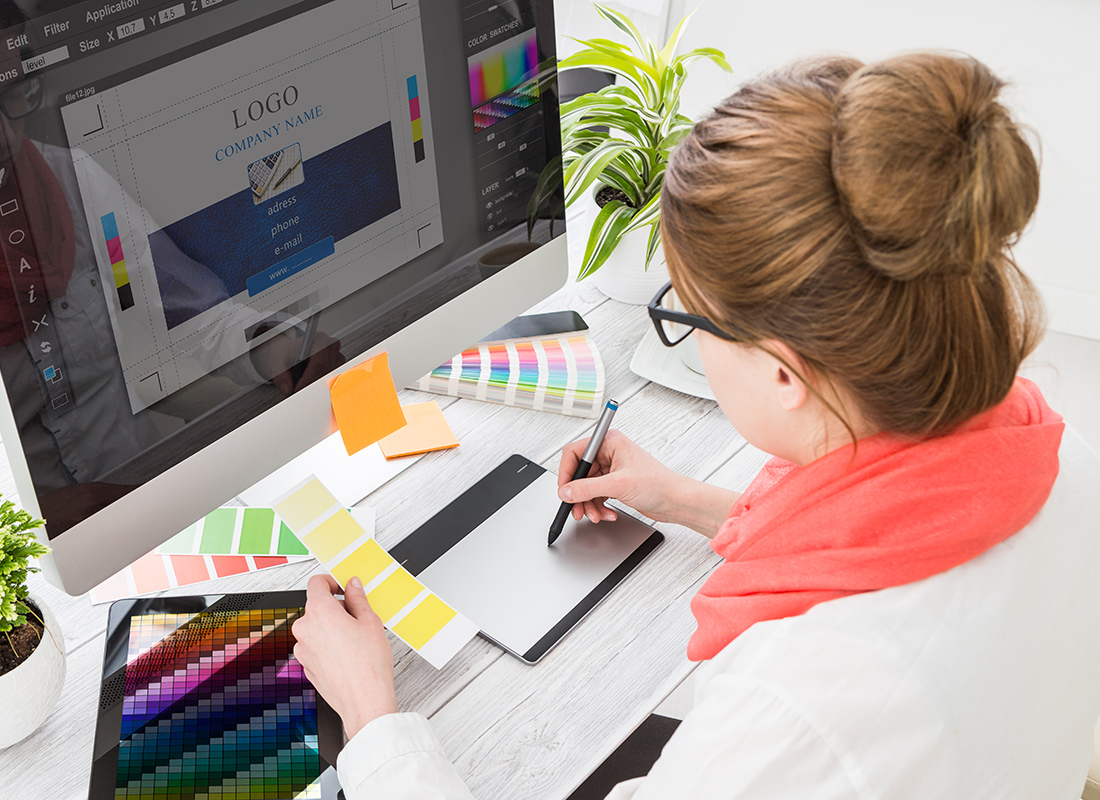 Graphic Designer: Occupations in Alberta - alis
Can you take someone’s idea and ramp up its impact? Do you have an eye for colour, design and accuracy? Then you may want to create a career as a graphic designer.
Choose a guide...

Create New Guide What is an alis guide?
Close
Occupations in Alberta
©
iStockphoto/scyther5

Interest in synthesizing information to prepare sketches, layouts and graphic elements of the subjects to be rendered using traditional tools, multimedia software and image processing, layout and design software; and in determining the medium best suited to produce desired visual effects and most appropriate vehicle for communication

Interest in precision working to co-ordinate all aspects of production for print, audio-visual and electronic materials such as Web sites, CD-ROMs and interactive terminals; and in estimating costs of materials and time to complete designs

Interest in consulting with clients to establish the overall look, graphic elements and content of communication materials in order to meet their needs; in supervising other graphic designers or graphic arts technicians, in co-ordinating the work of sub-contractors, and in working in a multidisciplinary environment

Graphic designers are problem solvers. They research and manage visual design projects. Graphic designers put their creativity to work and apply it to the right media for the best effect. Their focus may be electronic media such as the internet, or print media such as brochures, packaging, promotional materials, and annual reports. For information about visual communication designers who work primarily in electronic media, see the Animator, Interactive Media Programmer, and Web Designer occupational profiles.

On smaller projects, a typical timeline could be days or weeks. Larger, more complex projects can take months for final approval. Most design studios are set up for everything from initial concept to finished artwork. Some designers put their skills toward a particular aspect of the design process, such as design concept or layout. Some focus on a specific type of product, such as corporate identity, marketing communications or packaging design.

Graphic designers work directly with clients or with teams in a studio, in an advertising agency or in a government or corporate setting.

Self-employed or “freelance” graphic designers divide their time between the studio and meetings with clients, photographers and others in the design process. Travel may be needed.

A weekday schedule is standard. Overtime and weekend hours are not unusual to meet project deadlines.

This chart shows which job skills are currently in highest demand for this occupational group. It was created using this occupation's 100 most recent Alberta job postings, collected between Apr 29, 2022 and Dec 03, 2022.

Most graphic designers have post-secondary education in visual communication design or graphic design. Having a strong portfolio makes all the difference for finding employment. Computer skills are a must.

Graphic designers also need to stay on top of new developments in their field. They should be knowledgeable to within the last 6 months of the latest software technology.

The Society of Graphic Designers of Canada recommends a 3- or 4-year program in visual communications or graphic arts. Graduates of 1-year certificate and 2-year diploma programs may be employed as graphic artists, production artists or graphic arts technicians.

Graphic designers may be employed by or work on a contract basis for:

Typical career progression starts with a junior position. Designers advance into intermediate and senior graphic designer roles and then to art director after 10 or more years managing designers.

For advancement, self-employed contractors need to build a larger clientele. Bigger opportunities for other graphic designers depend on their qualifications and the size of the organization. Advancement means that the designer manages more people and larger projects.

In Alberta, the 5241: Graphic designers and illustrators occupational group is expected to have an average annual growth of 1.9% from 2019 to 2023. In addition to job openings created by employment turnover, 116 new positions are forecasted to be created within this occupational group each year.