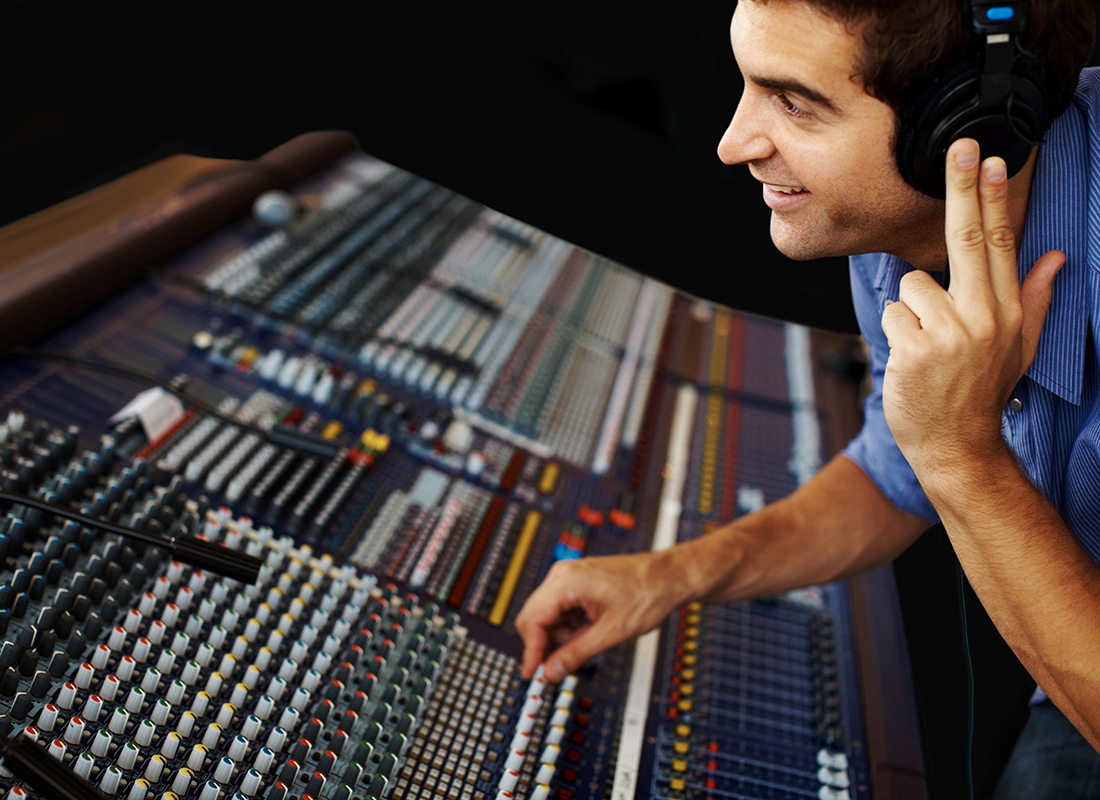 Recording Engineer: Occupations in Alberta - alis
Do you like working with electronic equipment? Do you have a good ear for pitch and tone? Can you work as part of a team? Then you may like the sound of a career as a recording engineer.
Choose a guide...

Recording engineers use a variety of techniques and electronic equipment to record, mix, process, manipulate and edit sound in production studios.

Interest in mixing, combining and editing music and sound at concerts and live events, and synchronizing edited dialogue, music and sound effect tracks from different sources

Recording engineers are not considered professional engineers and do not engage in the practice of engineering as defined in the Engineering and Geoscience Professions Act [pdf].

Unlike professional engineers who may design or construct audio systems, recording engineers:

In the past, studios often used analogue recording equipment and SMPTE (Society of Motion Picture and Television Engineers) or MIDI time code for synchronization. Now, most recording engineers use computers that allow them to work in a non-destructive format, work faster and more efficiently, and collaborate with others in locations throughout the world.

For information about engineers who control the sound components of live events, see the Sound Engineer occupational profile.

Recording engineers may be required to work long hours in a studio or on a film set to meet project deadlines. Evening, weekend and holiday work is common.

This chart shows which job skills are currently in highest demand for this occupational group. It was created using this occupation's 14 most recent Alberta job postings, collected between Nov 18, 2021 and Feb 01, 2023.

Although a related post-secondary certificate or diploma is an asset when seeking employment, there are no formal education requirements for recording engineers. Most have acquired a working knowledge of computer-based recording technologies, such as digital mixing and random access editing, and an ability to adapt quickly to many different recording formats and devices by learning on the job and taking related courses.

Knowledge of different types of music and music theory and harmony is an asset for those who work on music projects. For information about post-secondary music programs in Alberta, see the Instrumental Musician occupational profile.

Training to become a recording engineer is very specialized and only a few private vocational schools in Canada offer it. Occasionally, colleges, technical institutes, recording studios and electronic music stores offer evening courses or short seminars in sound recording. Aspiring recording engineers should discuss their career plans with people and employers in the industry before enrolling in a training program.

It can be difficult to break into recording engineering. Experience working on a practicum placement through a school training program or as a volunteer at a cable television station is an asset. Beginning in radio commercial production is another option.

It is common in the industry for someone to start out as a "gopher" or assistant engineer, and work their way up. You must be willing to work for little money to gain practical experience and establish a reputation for good work. Advancement generally takes the form of working on more complex projects and building a reputation for good work. Some recording engineers move into related positions, such as producer, or open their own recording studios.

Recording engineers are part of the larger 2011 National Occupational Classification 5225: Audio and video recording technicians. In Alberta, 75% of people employed in this classification work in the following industries: